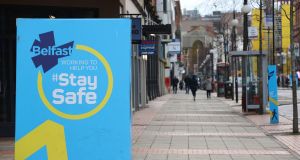 An empty street in Belfast. In the last seven days 4,921 new cases of Covid-19 were confirmed in the North, compared with 6,633 the previous week. File photograph: Liam McBurney/PA Wire

Northern Ireland’s Deputy First Minister has expressed confidence that difficulties over the sharing of data from passenger locator forms between the North and the State will soon be resolved.

Michelle O’Neill told the Assembly on Monday she was “hopeful” data would soon be shared between the jurisdictions. She said she and First Minister Arlene Foster had discussed the matter with the Taoiseach on Monday.

Micheál Martin, Ms O’Neill said, had “indicated today that they believe there’s going to be a resolution to the issue”, while Ms Foster said on social media that the Taoiseach had “committed to movement soon”.

Ms O’Neill also said there was a “conversation underway both in the South but also in Britain around mandatory quarantining in terms of people travelling in” and this was something that “absolutely needs to be looked at”.

The health ministers from both jurisdictions, Ms Foster and Ms O’Neill, Minister for Foreign Affairs Simon Coveney and Northern Secretary Brandon Lewis are expected to consider travel-related issues during an online meeting later this week.

There have been concerns on both sides of the Border that travellers can evade the requirement to self-isolate when arriving from abroad by flying into one jurisdiction and then crossing into the other.

Sharing the data provided on passenger locator forms would help address this by providing the authorities in each jurisdiction with information on travellers even if they arrive at a port or airport on the other side of the border.

In Dublin, the Department of Health has previously said the Government is “committed” to finding a resolution but there are legal and data protection issues which needed to be addressed.

In response to questions from The Irish Times on Monday, the Department of Health in Belfast said discussions were continuing to progress on the sharing of data from North to South.

The department on Monday reported the deaths of a further 17 people with Covid-19, bringing the total number of fatalities recorded by it to 1,747. The rate of new infections in the North is continuing to fall, with 422 positive cases identified in the last 24 hours.

In the last seven days, 4,921 new cases of Covid-19 were confirmed, compared with 6,633 the previous week. The average number of cases per 100,000 of the population over the last seven days is now 261.5, though there are large variations between areas.

The highest rate is in Armagh City, Banbridge and Craigavon, where it stands at 475. Derry and Strabane – which in the autumn had one of the highest rates of infection in the British Isles – is now the lowest in the North, at 139.4.

A total of 828 people are in the North’s hospitals with coronavirus, with 74 in intensive care.

On the call with the Taoiseach on Monday, Ms Foster and Ms O’Neill also discussed Mr Martin’s comments to RTÉ at the weekend about his view that Northern Ireland was not testing enough for the new, highly-infectious strain of Covid-19 which originated in the south of England, and which is becoming dominant in the Republic.

Later in the Assembly, Ms O’Neill said the Taoiseach had “made it very clear that it wasn’t about taking a swipe at anybody ... it was in recognition of the fact that there is an anomaly, the anomaly being that in the 26 counties in the south of Ireland there is an identification that this new variant was spreading far more rapidly and that doesn’t seem to be the case here”.

“I think that anomaly needs to be resolved. Clearly we live on an island, the virus has spread in the same way the whole way through the pandemic, and I can’t see how the new variant is behaving any differently,” she said.