Up to 1,000 Covid-19 cases a week among long-term care residents

Deputy Chief Medical Officer Dr Ronan Glynn has said that people entering Ireland should continue to restrict their movements upon arrival in the country - even with a negative test. Video: RTÉ 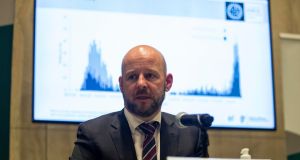 Prof Philip Nolan, chair of the Nphet’s epidemiological modelling group, warned that the number of Covid-19 patients in hospital would not drop below 1,000 before the end of February. Photograph: Colin Keegan/Collins Dublin

The new variant of Covid-19 first identified in the UK is contributing to the high level of outbreaks in hospitals and long-term care homes, according to public health officials.

The level of infections among staff and patients in healthcare settings is higher now than at any other point in the pandemic, according to Prof Philip Nolan of the National Public Health Emergency Team.

Over the past three weeks, there have been up to 1,000 cases a week among residents of long-term care facilities and 500 among staff, he said.

While the main factor driving these outbreaks was the level of infection in the wider community, the new variant was “playing a role” in making the virus more transmissible.

The variant discovered in the UK accounted for 62 per cent of samples tested most recently, officials said. However, there is no firm evidence the new variant is leading to an increase in deaths.

There is no evidence that a separate new variant, first identified in Brazil, is here, Dr Glynn said. Profiling of cases was ongoing and 50-60 positive cases with a link to Brazil have been identified.

Nphet reported a further seven deaths of Covid-19 patients on Monday. This brings to 2,977, the total number of deaths since the pandemic began.

It also reported 1,372 new confirmed cases of the disease.

The 14-day incidence of the disease has fallen to 766 cases per 100,000 people nationally. Monaghan has the highest county incidence, followed by Mayo; Leitrim has the lowest.

Case numbers are halving every 10 days and collectively people have achieved suppression of the disease, according to Prof Nolan, chair of Nphet’s epidemiological modelling advisory group.

The incidence remains very high in long-term care facilities and among vulnerable people, he said, and mortality remains high.

Prof Nolan also noted that admissions to hospital had been decreasing for the past two weeks and that ICU admissions “may be starting to decline”.

The number of virus patients in hospital will remain very high “for weeks to come”, he warned.

The number of Covid-19 patients in hospital will not fall below 1,000 before the end of February, he forecast, while ICU numbers were likely to stay above 100 in the same period.

In relation to the reopening of schools, Dr Glynn described the trend in case numbers as “very promising” but said “we’re still way higher than we need to be”.

“Right now is not the time to see the kind of mobility of 1 million people that is associated with the full reopening of schools.”

Nphet needed to be reassured that the improvements seen in case numbers were continued and will watch this trend closely in the coming weeks. He said he could not see things changing “in the next fortnight”.

Waterford GP Dr Dermot Nolan told the Nphet briefing his county had been hard hit in the third wave of the pandemic, with one in 20 people infected, having been very fortunate during the first two waves.

He highlighted two recent cases that demonstrated the impact of widespread community transmission of Covid-19 on other health issues people have faced.

In one, a 10-year-old boy diagnosed with acute appendicitis had to go into hospital alone for the operation because his entire family had tested positive for Covid-19 and were in isolation at the time.

“Consider, if you were a parent, how you would feel,” Dr Nolan said, adding that the boy had made a full recovery.

In the second case, a woman with long-term respiratory issues had suffered new onset heart failure but refused to go to hospital because she was “terrified” of catching Covid-19.

Rejecting the idea that the virus is “not that bad”, he said he was still treating young, fit patients suffering from extreme lethargy many weeks after contracting the virus.

So far this month, there have been 688 deaths, compared with 175 in December and 164 in November.

Dr Glynn said up to last week there were no excess deaths this winter but he expected this to change.