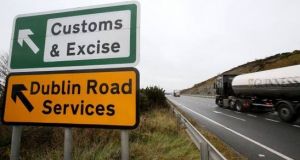 Calls for a border poll at this time are “premature”, the Brexit spokesperson for the SDLP has said.

Speaking at the MacGill summer school in Glenties, Co Donegal, Clare Hanna MLA said “calls now for a border poll are like removing the scaffolding before the structures are built”.

She called for greater integration between North and South on economic development, third level education and transport to be prioritised before any vote is put on the political agenda.

Ms Hanna said foreign direct investment should be pursued on an all-island basis, while politicians needed to “articulate positive, progressive alternatives to the status quo, for what a new Ireland could look, feel and actually be in the future, and how it can deliver greater social and economic cohesion for each of us and our families.”

The border poll should be the last, and not first, piece of the jigsaw,” she said. Ms Hanna argued a rushed vote on reunification, if successful, would risk repeating the mistakes of the past by trapping a large and unhappy minority in a political structure which they do not support.

“Our modern, pluralist new Ireland will not be built on a narrow electoral win slipped through in a period of chaos,” she said.

The impact of the collapsed executive on Northern Irish society is “every bit as injurious to the [Good Friday] Agreement as some of the rights suppressions and Brexit moves of the DUP and UK government”, while unionism and nationalism are “falling into the trap of caricaturing each other and dismissing any hints of our shared identity”.

Ms Hanna argued the Northern Irish institutions “have developed in a way which inadvertently incentivises intransigence and division.”

“What both the Brexit and current accelerated border poll campaigns ignore is the face that there is no constitutional arrangement for this island or continent that makes all your problems or your neighbours go away.”

Earlier in the day, the summer school - which is devoting an entire day to Northern Irish issues for the first time - heard from the financial journalist and author Paul Gosling that a border poll now is “strategically not very intelligent”.

Mr Gosling said that “reunificaiton is the most sensible approach over the medium term. The question is how we get there”.

He encouraged Northern Irish policymakers to “copy the measures the Republic has taken to turn around its economy,” with a focus on tax, education and infrastructural development.

Mr Gosling argued that Taoiseach Leo Varadkar and Tánaiste Simon Coveney, rather than pursuing a border poll, should prepare for a united Ireland and an integrated economy by considering whether a new constitution or a new name for the State would be necessary, as well as working on policy issues like health and housing and preparing a regionalised economic strategy.