Anger among commuters as Irish Rail fixed problem ‘too soon’ 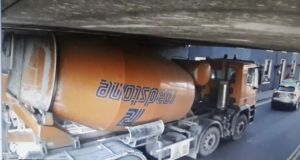 Rapid action on the part of Irish Rail engineers in extracting a cement lorry from where it was stuck under a bridge in Dublin, has led some passengers to heap criticism on the company. Photograph: Irish Rail/Twitter

Rapid action on the part of Irish Rail engineers in extracting a cement lorry from where it was stuck under a bridge in Dublin, has led some passengers to heap criticism on the company.

At 8.45am as the morning rush was nearing its peak the Roadstone cement lorry became stuck under the railway bridge at South Lotts Road, between Grand Canal Dock and Pearse stations.

Irish Rail posted a picture of the lorry on its Twitter account and apologised to customers as services between the two stations were halted on safety grounds. Passengers on Darts at nearby stations were informed by Dart drivers of the delay and the cause of it. Just further out from the bridge strike, passengers at Sandymount station were told of the likely delay, and many left their Dart fearing that the incident could take most of the day to resolve.

However, many passengers took to Irish Rail’s Twitter feed to express their annoyance when, having left the Dart, they saw it move off again.

One commentator on Twitter remarked: “Dart has just left Sandymount . . . no chance of giving a heads up to all those who already got off the Dart so they could get back on? Great work”.