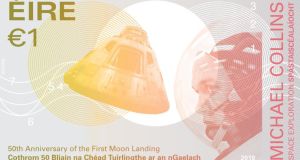 One of two stamps issued by An Post on July 4th, 2019, to commemorate the moon landing. The word gealach (Irish for moon) appears incorrectly as gaelach (meaning Irish)

Just over 50 years after Neil Armstrong took one small step for a man and one giant leap for mankind, An Post has had to take some steps of its own after printing a commemorative set of postage stamps featuring a misspelling of the Irish word for “moon”.

An Post apologised after a member of the public spotted the error which appeared on two stamps that were issued as part of the four-stamp Space Exploration set unveiled last week by Cady Coleman, a retired Nasa astronaut.

Ms Coleman is one of four astronauts with Irish roots featured in the set along with Neil Armstrong, Michael Collins and Eileen Collins.

The stamps, each with a face value of €1, feature a misspelling of the Irish word for “moon” with the word “gealach” appearing incorrectly as “gaelach”.

The mistake appears on the stamps featuring Armstrong and Michael Collins, both of whom took part in the Apollo 11 moon mission which saw the Eagle module land on the moon’s surface on July 20th, 1969.

An Post said the error was spotted on Sunday by a member of the public.

While government agencies have been criticised in the past for publishing unintelligible material in Irish the use of free online tools to translate English into Irish does not appear to be the issue in this instance.

In a statement An Post said the error occurred during the production process “when the letters “a” and “e” were transposed”.

“While the original draft of the Irish text was correct the word gealach (moon) appeared incorrectly as gaelach (Irish) in two of the four stamps featured.”

An Post said the error was not spotted before the print run of the set which was released for sale in selected post offices on July 4th.

“An Post apologies for the error, and has taken steps to ensure that this will not happen again. We hope this will not detract from a wonderful celebration of an epic event.”