Temperatures reach over 25 degrees in Donegal and Dublin 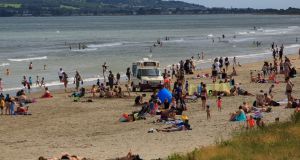 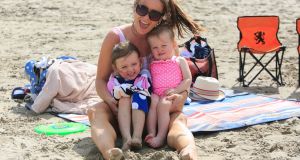 Louise Bruton with her children Hailey (3) and Willow (1) from Meath enjoying the good weather on Portmarnock Beach on Monday. Photograph: Collins 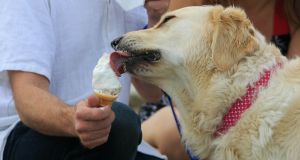 Donegal recorded the highest temperature in Ireland on Tuesday with the mercury at Malin Head reaching 25.7 degrees, while in Dublin the Phoenix Park hit 25.5 degrees.

Some 150km north of Malin Head, the popular beach at Bundoran, Co Donegal has been closed following unspecified pollution which is now under investigation.

Bundoran, a sandy stretch facing Donegal Bay and the Atlantic and not far from the town’s main street, is very popular with surfers and bathers.

Donegal County Council issued a statement saying “an incident has occurred leading to the deposition of polluting matter on the beach and the relevant authorities have been informed”.

“It is currently being investigated by the Council and Irish Water and further updates will be issued when available. In the meantime the beach is closed to the public.”

A spokeswoman could not comment on the nature of the pollution or for how long the beach might remain off limits to the public.

In Co Kerry, bathing in the sea on Waterville Beach will remain closed until later this week after lightning struck a pumping station at the town’s waste water treatment plant.

The €18 million plant opened in 2013 after a decade long campaign by locals picked up a Green Coast award for the quality of its its water.

However an overflow on Sunday after lightning struck a pumping station at Village Green may have affected the bathing water quality, Irish Water said.

A bathing water notice is in place “as a precautionary measure”.

“ In all cases, Irish Water prioritise the health and safety of the public,” it said.

The weather is set to remain fine with the north and east of the island xpected to get the finest conditions again on Wednesday with some cloud cover in the west and south, although overall temperatures will fall off slightly. Met Eireann forecasters say temperatures will range from about 20 to 24 degrees, if slightly higher in the Dublin area.

The forecast for the weekend, while featuring the odd shower on Saturday, is also for mainly dry days with good spells of sunshine and highs of 17 to 21 degrees.

Sunday may see temperatures hit 22 degrees. It will be humid at night with an increasing risk of an isolated thundery shower breaking out. Lowest temperatures will be in the region of 13 to 16 degrees.

Tomorrow, Wednesday, temperatures will fall back slightly but it will remain warm, with highs of 24 degrees in places - still blissful summer weather by traditional Irish standards.

Some clouds may appear on Thursday which will see lower temperatures while Friday will be fresher as winds switch to westerly leading to highs of 16 to 20 degrees.

Overall the outlook is for good sunshine over the weekend with some intermittent cloudy periods. Misty conditions may persist near the coast and temps will be lower.

The good weather has brought warnings from water safety bodies for families to take care when visiting beaches and swimming.

On Monday a six-year-old girl was dramatically rescued from the sea in Portmarnock, Co Dublin after she fell off a an inflatable lilo, having been blown out to sea by onshore winds.

Irish Water has appealed to people to be safe and not to use inflatable toys as boats in the sea.

Conditions are expected to be even hotter in northern Europe this week and the Irish Travel Agents’ Association has issued advice to Irish holidaymakers travelling there as temperatures of up to 40 degrees are forecast.

The high temperatures which are expected to last just a few days should affect northern France, as well as parts of Belgium, Luxembourg and the Netherlands.

Spokesman Pat Dawson said holidaymakers staying in affected areas to should stay hydrated throughout their stay. They should also avoid direct sunlight during the hottest periods of the day, he said. “We are encouraging all travellers to follow the advice of the local authorities which are implementing measures to tackle the extreme heat.”