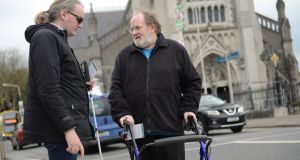 Politics starts with the local. In 2005, Declan Meenagh got his first taste of on-the-ground campaigning after Dublin City Council turned off audible signals at a number of traffic lights across the city.

Meenagh, who has only 5 per cent vision because of a rare eye condition, campaigned with other members of the blind community and got the decision reversed.

Some 14 years later he is running for a second time as a local election candidate in Cabra-Finglas. Everything he has learned since 2005 has convinced him that politics needs more people like him.

“It’s about having someone with a disability with lived experience on the council, who can clarify what small things need to be changed,” he tells The Irish Times on a wet morning this week in the centre of Cabra.

Running for Labour, Meenagh offers an example: the lack of standardised Braille markings on ATM keypads in Ireland causes confusion. “I can’t even independently use an ATM in this city,” he says. Yet it could be fixed in moments if someone in power decided it should.

Today, Meenagh is one of more than 1,800 people who have either been nominated or declared their intentions to run in the local elections later this month, according to latest estimates.

That is fewer than the 2,038 who ran in 2014. However, nominations remain open until midday on Saturday and the numbers will rise as the final hours and minutes pass.

Often regarded as a bellwether of the national mood, local elections can sometimes give a searing insight into the voters’ mood, offering an early provisional verdict on the future political prospects nationally.

This time more women than ever are on the ballot papers that will face voters on May 24th, while an increased number of those who have come to live in Ireland in recent years are also putting themselves forward.

In 2014, 440 women ran, little more than one in five. This time, there will be 532, meeting the 30 per cent target set by Women for Election, a non-partisan body that aims to increase the number of women in Irish politics.

“We had been working towards the target of 30 per cent of candidates this year who would be women, and we’re delighted to see that right across the board,” says Women for Election chief executive Ciairín de Buis.

“Obviously we would prefer that to be higher, but considering so many of the incumbent councillors who are running again are men, it’s great to reach the 30 per cent mark.”

This time last year Annette Mooney was campaigning for the Repeal of the Eighth Amendment from the Constitution. This year she is the People Before Profit candidate in Dublin’s South-East-Inner City.

“It was amazing to be part of. And young people, not just women, knew that you had to get involved to bring about change.”

In Balbriggan, Carah Daniel, aged just 19, is one of the youngest candidates in the country. For her, the death of Savita Halappanavar in 2012 in a Galway maternity hospital ignited her interest in politics.

Daniel was just 13 when Halappanavar died. Back then she admits there was much she did not understand, but last year’s Repeal campaign led her to decide not just to be interested in politics, but to run.

“With so many young people registering to vote [for Repeal], we saw that more people are politicised . . . We want to promote issues that affect young people, and young people are more engaged than they would have been,” she says.

However, the Social Democrats and People Before Profit have gone one better, running more women than men on their tickets – the first time sizeable political parties have done so.

Gender quotas do not apply in the locals. However, Maynooth University’s Dr Adrian Kavanagh, who specialises in the geography of elections, says quotas in other elections are “having a subconscious or indirect effect” across politics.

Fianna Fáil did not respond to a request for comment when asked if the party plans to add more female candidates by close of nominations and what measures it had taken to encourage women to run.

Often elections are won by those able to get potholes filled, shrubs cut or playgrounds cleaned. Sometimes, though, they can be “a canary in the mine”, highlighting issues that later dominate a Dáil election.

Your whole private life is gone. You belong to the public

Popularity and being a known face in the community comes with some caveats, he accepts: “When I’m out and about I’m stopped by people. Your whole private life is gone. You belong to the public.”

“That may sound strange – the dog poo – but I have people, young families, who are terrified of walking and taking dog poo into their homes who are afraid of infections or diseases,” he says.

Half of the candidates interviewed highlighted the same issue. It is a major problem for the disabled, says Declan Meenagh, as many cannot see it, or cannot clean it up if they step on it. “It’s not just a minor inconvenience; it’s robbing people of their independence in some cases.”

Political analyst Sean Donnelly, the author of one of the bibles of Irish politics, www.electionsireland.org, believes local issues will, yet again, dominate, rather than national or international ones.

“People vote for the candidate they know, the party they know or they just pick somebody completely out of the blue,” says Donnelly, though sometimes the local and the national can merge.

Housing figures this week recorded that 10,305 people are now homeless. Annette Mooney leads with housing at nearly every door she knocks upon. “It’s the biggest issue. I’ve never seen anything quite like it.”

Many other Opposition candidates agree. However, Fine Gael’s Obi Ekoba, running in Ballyfermot-Drimnagh, says it has not been brought up with him too often at the door, compared with local community issues.

However, local housing problems will be used as a weapon in the hands of Opposition parties to damage Fine Gael’s handling of the crisis, says Dr Eoin O’Malley, an associate professor in political science at Dublin City University (DCU).

“Parties on the left and Fianna Fáil will start talking about housing and housing policy. A lot of that will just end up being beaten around at the Government and blaming the Government for not doing enough,” he says.

However, considering Sinn Féin and other parties on the left have a majority on Dublin City Council, it is hard for these parties to say a vote for them is going to sort things out, according to O’Malley.

Balancing the local and the national contributes to the stresses and strains of an already demanding role, if one that excites little love on the part of voters. Councillors are paid €16,891 a year, plus allowances.

Most have, and need, other jobs. An increasing number have retired from full-time jobs. Last June, the Government launched an independent review into the role and payments for councillors.

Not everyone is running again, however. Social Democrat Templeogue-Terenure South Co Dublin councillor Dermot Looney is stepping down after 10 years, blaming the demands of the job.

Few of the challenges are understood, he believes: “There’s a lot of work involved – sometimes very stressful, time-consuming and pressurised work. It puts a lot of pressure on your personal, social and professional life.”

Looney, a primary school teacher, says the current system is a “halfway house” and he thinks the role should become full-time with fewer councillors, though ones with greater powers.

“The work is, in essence, already full-time. People like myself, who are living in Dublin trying to pay a mortgage, there’s no way I could just be a councillor full-time from a financial point of view.”

In December, Sinn Féin submitted a proposal to the review led by senior counsel Sara Moorhead suggesting that “full-time” councillors be paid a salary of €35,000.

Having spent 34 years on Dublin City Council, Christy Burke says the job is more demanding than ever. He works 10 hours a day, six days a week. With just €16,000 on offer, fewer and fewer people will be able to run, he fears.

Producing an interim report last December, however, Sara Moorhead suggested that Ireland must first decide what it wants councillors to do before it makes final decisions on what they should be paid.