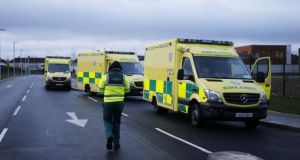 Ambulance staff are to hold two 24-hour strikes at the end of May and the beginning of June as part of their long-running campaign over trade union representation rights.

Members of the National Ambulance Service Representative Association (Nasra) are to hold a work stoppage for a full 24-hour period in the week starting May 27th and another on the week beginning June 3rd.

Nasra is a branch of the Psychiatric Nurses Association (PNA)and its general secretary Peter Hughes said it would announce the exact dates of the strikes in the next week or so.

Mr Hughes said the forthcoming stoppages were likely to cause more disruption as they would be of longer duration than on previous days of industrial action.

Nasra members haveheld six stoppages since January as part of a campaign to have their organisation officially recognised by the HSE as a representative body.

The previous stoppages have run from 7am to 5pm and the HSE has deployed managers with appropriate qualifications as well as military ambulances and personnel to provide cover during the strikes.

Ambulance staff represented by the trade union Siptu have not been involved in the dispute.

Speaking at the PNA’s annual conference in Wexford on Friday, Mr Hughes also signalled that there could be further strikes by ambulance personnel in the weeks ahead if the dispute was not resolved.

“This is not just going to disappear. Our ambulance people are very resolute.”

The HSE does not recognise the PNA or its Nasra branch as a representative body for ambulance personnel.

“The National Ambulance Service recognises Siptu, Unite and Forsa for staff in the service. In particular Siptu is the recognised trade union for front-line staff,” a spokesman said

The HSE said “recognition of other associations or unions would undermine the positive engagement that exists and would impair good industrial relations in the National Ambulance Service”.

The Minister for Health Simon Harris said it was regrettable that the PNA/NASRA had taken the decision to escalate their dispute. “The HSE will continue to ensure patient safety through robust contingency planning.”

Separately the PNA said talks are set tobegin next Tuesday in an attempt to resolve a dispute involving pay and recruitment and retention of psychiatric nurses.

Mr Hughes said it had not yet received definitive pay proposals from the Government and health service management.

Members of the INMO backed settlement proposals in a ballot counted on Thursday.

Mr Hughes said his union had concerns that some elements of the INMO deal would not be applicable to the mental health service.

He said there were already 700 vacancies for psychiatric nurses and the new restrictions would worsen the situation.

Mr Hughes again expressed concern that the HSE May face difficulties in securing sufficient nursing staff to operate the new €140 million national forensic mental health service – the facility that will replace the existing Central Mental Hospital – when in opens in Portrane in north Dublin next year.