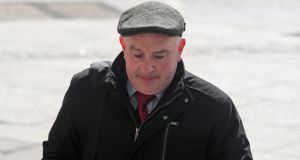 Patrick Quirke who was convicted of the murder of Bobby Ryan. Photograph: Collins

Tipperary farmer Patrick Quirke is expected to appeal his conviction for the murder of part-time DJ Bobby Ryan.

Quirke was found guilty by a majority, 10-2 jury verdict on Wednesday.

An appeal is likely to focus on decisions made by Ms Justice Eileen Creedon in response to legal arguments made during what was the longest murder trial in the history of the State.

These arguments in the Central Criminal Court occurred in the absence of the jury, and on occasion, included calls that the trial should be abandoned.

These legal arguments and the rulings that were made are among the matters Quirke is likely to emphasise in the appeal, according to sources.

Quirke (50) of Breanshamore, Co Tipperary had pleaded not guilty to the murder of Mr Ryan, a part-time DJ going by the name Mr Moonlight.

Mr Ryan went missing after leaving his girlfriend Mary Lowry’s home at about 6.30am on June 3rd, 2011.

Mr Ryan’s body was found in an underground run-off tank on the farm owned by Ms Lowry and leased by the accused at Fawnagown, Tipperary, on April 30th 2013, 22 months after he went missing.

The prosecution claimed Quirke had murdered Mr Ryan so he could rekindle an affair with Ms Lowry (52).

The defence said the prosecution had failed to prove their case beyond a reasonable doubt and that Quirke should be acquitted.

Following weeks of evidence, the jury deliberated over the case for eight days, in total for more than 18 hours, before their verdict was announced.

The jury did not hear several pieces of evidence, including secret audio recordings of Quirke being “intimate” with his former girlfriend Ms Lowry, and that his computer was used to look up articles on murderer Joe O’Reilly, who killed his wife.

The evidence was ruled inadmissible following representations from the defence team, held in the absence of the jury.