‘There is ... fear and sometimes depression when it dawns on them where they are’ 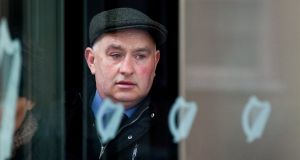 Men like Patrick Quirke who begin life terms having never been in jail usually struggle at the start of their sentence, according to informed sources.

“They come in and they keep their heads down. You generally don’t hear a peep out of them for a long time,” said one prison source. “There is often a lot of fear and sometimes depression when it dawns on them where they are.”

Another prison insider agreed, saying he had personal experience of witnessing the first days in prison of several convicted killers.

“The only time these guys ever experienced anything similar [to prison] was being held in a Garda station for questioning about their crimes,” he said. “When you go from that to a life sentence . . . with very intimidating people around you, it doesn’t take a genius to imagine the shock.”

However, the same source said men like Patrick Quirke – prisoner 107243 – are usually model prisoners because they are predictable, literate and have no drug problems.

“Normally they are the most trustworthy prisoners after they get over the shock of that cell door closing behind them,” said the source.

Quirke (50) is not unusual in being jailed for life for a first-time offence. Of the 21 life-sentence prisoners recommended for parole in 2017, for example, eight had no previous convictions before they committed the murder for which they received a life term. That sentence is one of no fixed duration and from which release must be agreed by the Parole Board and minister for justice. By today’s standards it is usually between 18 and 21 years.

Quirke must acclimatise to life without liberty and family as he settles into the system in Mountjoy Prison, Dublin, to which he was committed after his conviction on Thursday for the murder of Bobby Ryan.

Quirke was placed in a holding cell before processing. Subsequently, inmates have their photographs, fingerprints and measurements taken and any marks on their bodies are noted. In a committal interview they give details about themselves, including any addictions.

Is prison a harsh regime?

After being officially committed into the system in the “reception area”, all prisoners are then transferred to the Mountjoy basement where they spend their first 24 hours.

It is intended as the least intimidating setting for an introduction to prison life before the harsh reality of the regime proper. They are checked every 15 minutes, a precaution against suicide.

All prisoners meet the governor and medics while in the basement as most have a history of drug use.

Quirke’s cell in the basement – where he spent his first night – has in-cell sanitation, television and kettle. On Thursday evening he was due to be transferred to a cell on a wing of the prison.

Because he is from Tipperary he would likely be transferred to the Midlands Prison in coming weeks, or possibly sooner, to make family visits easier, according to informed sources.

Each day in State prisons after collecting breakfast at 8am and bringing it back to their cells inmates are locked in until 9.30am when they are let out for recreation, work or education. They return to cells at noon to eat and stay there until 2.15pm.

Recreation or training follows until 4pm when they collect tea and are locked in cells until 5.30pm. Then there is 90 minutes of recreation until 7.30pm when they are locked into cells with TV or reading to occupy them. The vast majority of cells are single occupancy.

The days when inmates had to cope with the indignity of slopping out are long gone as in-cell sanitation facilities are available.

Each cells contains a bed, table, television , kettle and radios are also allowed . Prison work, classes and working out in the gym are among the activities which help keep people occupied though prisoners have the option to stay in their cells.