Northern Ireland is an ‘inhospitable place’ for journalists 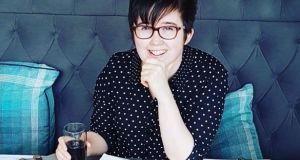 World Press Freedom Day: “Lyra ... was fearless, as the women of Derry are fearless, and they will not be intimidated by sinister threats daubed on signposts in the dark of night.” Photograph: PA

The vulnerability of journalists like Lyra McKee - and of journalism - has been highlighted at an event to mark World Press Freedom day.

Séamus Dooley, Irish secretary of the National Union of Journalists, said it was “profoundly tragic” that Ms McKee (29) - “who in many ways represented the future of journalism in Northern Ireland” - had been shot dead, “by those who offer no future”.

Ms McKee, also an activist for LGBT rights and socio-economic equality in the post-Belfast Agreement era, was killed by dissident republican gunfire during riots she was observing in the Creggan area of Derry last month.

“Lyra had a vision of an alternative Ulster based on equality, justice and social solidarity. She was fearless, as the women of Derry are fearless, and they will not be intimidated by sinister threats daubed on signposts in the dark of night,” said Mr Dooley.

He said the NUJ is concerned the murder of journalist Martin O’Hagan by the Loyalist Volunteer Force in 2001 is still unresolved, and about the arrest last August of journalists Trevor Birney and Barry McCaffrey. They made a documentary about the 1994 Loughinisland murders and were questioned about allegedly stealing police material.

“Northern Ireland remains an inhospitable place for journalists and the treatment of Trevor and Barry illustrates in microcosm the difficulties faced by those who seek the truth”.

In all 53 journalists were killed across the globe last year, the highest profile being the murder of Washington Post columnist Jamal Khashoggi in the Saudi consulate in Istanbul in October.

The most dangerous place for journalists in 2018 , according to the international advocacy organisation the Committee to Protect Journalists, was Afghanistan where 13 died, followed by Syria were nine lost their lives.

Meanwhile, Tánaiste Simon Coveney has strongly condemned graffiti warning people in Derry not to speak to the PSNI about the shooting dead of Lyra McKee

Dissident republicans are believed responsible for the graffiti, which was daubed on walls overnight in the Creggan area of the city.

“There is a small number of people trying to reinstate fear on the communities to prevent them from sharing information that can lead to a prosecution of the person who pulled the trigger, and hopefully those who provided the gun to do that,” said the Minister for Foreign Affairs.

“My message to communities in NI who live amongst paramilitaries and dissidents is if you are going to move away from atmosphere of fear and intimidation you need to work with politicians that will lead Northern Ireland into a different direction.”

To mark World Press Freedom day, NewBrands Ireland, reiterated its campaign for reform of the defamation laws. Describing them as “among the restrictive in Europe and throughout the English speaking world” the organisation said they had a chilling effect on the media’s capacity to bear witness to the truth.

“Good defamation policy is categorically not about giving journalists a free rein to write what they like,” said Vincent Crowley, chairman of the representative body for newspapers here. . “It is about setting the right balance to protect people’s reputations and the need to defend and promote freedom of expression and the media’s ability to freely report on matters in the public interest.”