Liberties protest at site of proposed ‘rock and room’ hotel

Protesters staged their third protest in as many weeks in the shadow of Vicar Street, close to where developer Harry Crosbie is getting ready to build an eight-storey 185-bedroom hotel. Video: Conor Pope 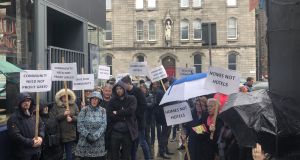 ‘We just want developers to come to talk to us. And Crosbie has to understand what the impact of this hotel will have on of the people who live here.’

“Harry Crosbie hear us clear, we don’t want eight stories here,” came the chant from a small group of protesters gathered in driving rain in the shadow of Vicar Street close to where developer Harry Crosbie is getting ready to build an eight-storey, 185-bedroom hotel.

The venture, which Mr Crosbie has dubbed a “rock and room concept” because of the links the hotel will have with the music venue next door, is due to open for business in 2020 if it gets the green light from An Bord Pleanála.

However, protesters staging their third demonstration in as many weeks at the site on Saturday afternoon argued that the development would further damage one of the oldest areas of Dublin and negatively affect the lives of the local community.

Ahead of the protest People Before Profit Cllr Tina MacVeigh said the developer had “been absolutely clear that he does not want to budge on the height of his hotel. He is not considering the impact of the proposed development on the local community”.

She said the Government and Dublin City Council had “allowed developers to run riot across the city. Communities are continuing to fight tooth and nail for any scrap of land they can use.

“Meanwhile, hotels and luxury student accommodation is springing up with no real consultation happening with residents about what type of development they want in their area. The fight goes on for green spaces, community facilities and secure, affordable housing.”

Her concerns were echoed by People Before Profit TD Bríd Smith, who led the protest. “It’s not that we have an objection to the height of the building, but what we have is an objection to a building of this height in the Liberties.” She also said that if the hotel goes ahead, the eight storey-construction “will set a precedent” for further developments in the area.

“We have no problem with a five-storey hotel, [but] an eight-storey hotel is just too much,” she added.

She said local resident objections were “about having regard for the oldest part of the city”. And she stressed that the resistance to this proposed development is not a case of Nimbyism.

“This is the oldest part of the city and it should be protected. The biggest act of vandalism is just across the road where the Dublin City Council building was built on an old Viking settlement and this would be vandalism too.”

A report accompanying Mr Crosbie’s planning application stressed that it would have regard for the local community and that the development would contribute towards the implementation of a core strategy of the city development plan in respect of regeneration, urban design and economic and tourism development.

It also argued that the development would “provide a catalyst and dynamic for the regeneration and redevelopment of the Liberties area and will enhance the attractiveness and diversification of the city’s tourist accommodation offer”.

Fáilte Ireland made a submission with the city council in support of the application.

However Joyce Reid a local resident with deep roots in the local community remains unimpressed.

Her family’s connection with social housing in the area goes back more than a century to when the first homes were build by the local authority.

“We have been living here since the very beginning and we have a right to have a say. In our area we have builders to the left of us and builders to the right of us and we are stuck in the middle and we haven’t a clue what’s going on. We just want developers to come to talk to us. And Crosbie has to understand what the impact of this hotel will have on of the people who live here.”