Vote will take place on May 24th, the same date as the local and European elections 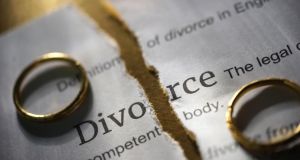 The government has announced the establishment of the referendum commission for the upcoming vote on reducing the waiting time for a divorce from four years to two.

Under the proposed legislation, which will need a constitutional referendum to pass in order to be enacted, the time spent living apart by couples before becoming eligible for divorce will be cut from four years out of the preceding five to two years out of the previous three.

High court judge Ms Justice Tara Burns has been nominated by the chief justice to act as chairperson of the commission, which will be completed by the comptroller and auditor general, Séamus McCarthy, ombudsman Peter Tyndall, and the clerks of the Dáil and Seanad, Peter Finnegan and Martin Groves.

Ms Justice Burns was appointed to the high court in 2018 and is currently assigned to the special criminal court.

In a statement, Minister for Local Government Eoghan Murphy said that he had made the order under the Referendum Act 1998 along with Minister for Justice Charlie Flanagan and Minister for Culture Josepha Madigan.

The vote will take place on the same date as the local and European elections, May 24th.

The liberalisation of divorce law was first proposed by Fine Gael minister Josepha Madigan in 2016, when she was a backbencher.

The independent statutory referendum commission is responsible for the preparation, publication and distribution of impartial explanations about the subject matter of a given referendum proposal.

It is also charged with promoting awareness of the referendum and encouraging the electorate to vote.