Leopardstown tip: ‘Keep your money in your pocket, it’s safer there’ 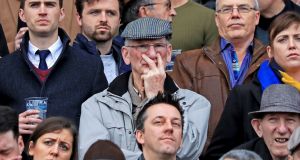 A punter looks on during racing. Photograph: Donall Farmer

Former minister for communications Denis Naughten appeared resigned to his fate as the light faded and the second day of the Christmas meeting at Leopardstown drew to a close.

With all but one race left to run, the Roscommon TD, who lost his ministerial portfolio in October, said he was on a losing streak. In spite of his inability to pick a winner, he was in good spirits as he and his two brothers soaked up the atmosphere.

“I really enjoy racing, and it’s a bit of a tradition for us,” he said. “We’re usually here on the second day and give St Stephen’s Day a miss, as it can be a bit crazy. I hear it was crazy yesterday anyway,” he added, referencing the crowds who poured through the turnstiles on the first day of the festive meeting.

“All I need now is a winner. I’ve had nothing all day.”

Clear skies and unseasonably mild temperatures drew a crowd of 16,439 to the course and caused long queues outside, but the organisers appeared to have a better crowd management system in place than on Wednesday, with security staff deployed to slow the punters racing towards the entrance.

“We don’t want yiz all to get crushed, now do we?” a cheery staff member said to an impatient group held up before the last hurdle of the final turnstile. When asked if he had any other tips, he suggested: “Keep your money in your pocket, it’s safer there.”

The odds of anyone following his tip were as long as the queue at the on-course ATM, where braying young men in flat caps and three-piece suits and loafers, untroubled by the merest hint of socks, laughed and joked with women who were tottering in high heels.

There was precious little for the celebrity spotters to see, although rumours circulated that The Coronas were in the stands, prompting several photographers to google the band to find out what they looked like.

As the crowd at the turnstiles thinned, a family rushed through. “We’ve an eye on one horse in particular,” the mother said when asked what the rush was.

“It’s grandad’s horse and we have come up all the way from Limerick, ” her young daughter said. “Will he win, Mammy?

“Fingers crossed,” said the mammy. “If we have to go out on the course and push him, we will,” she added before they disappeared into the crowd. Their horse finished last.

Anne Marie Flynn and her husband, James Niland, from Rathfarnham, Dublin, backed winners in all but one race. “This is our third or fourth year coming,” Flynn said, “so I suppose it is a bit of a tradition now. It has never been as warm as this, though.”

While crowd management at the start appeared better than a day earlier, traffic snarl-ups on the way out prompted some enraged punters to take to social media to complain. Although it’s possible their bad tempers were caused as much by a big day for the bookies – who took in almost €1.5 million – as their driving woes at the end of the day.