Mayhew was criticised by both sides over shoot-to-kill decision 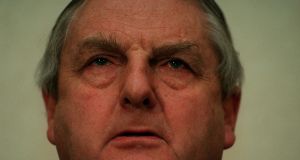 Among the most controversial politicians of 1988 was then British attorney general Patrick Mayhew. On January 20th that year, Irish diplomat Richard Ryan reported to Dublin that he had “run into” Mayhew in the House of Commons the previous evening and found him in a state of high indignation over extradition. Mayhew said it was “all most distressing!”

Were he to maintain such a confrontational attitude, Ryan believed that he “just might try the patience of Cabinet members who are indeed concerned about extradition, but in its context in the overall Anglo-Irish relationship”. Ryan found “the waspish tone of Mayhew’s comments” to be “quite unattractive” and lacking in “any ring of statesmanship”.

But some few days later, on January 25th, Mayhew announced that there were to be no prosecutions of security force members arising from the Stalker and Sampson inquiry into an alleged shoot-to-kill policy by the security forces in Northern Ireland. The reason he gave was “national security”.

This caused consternation among Irish nationalists. Gerry Collins, as minister for justice, told an informal meeting at the Northern Ireland Office in London that it had done “colossal damage to trust and confidence” and had helped “fill the coffers” of the terrorists. He believed that a “very high percentage” of the Irish public believed that the “cover-up” went “all the way up to the British cabinet”.

Nor was criticism of Mayhew’s approach confined to Irish politicians. The department of foreign affairs files just released reveal that very many of his British colleagues were perplexed by his decision.

His predecessor as attorney general, Michael Havers, confided to Ryan that, had he still been in office, “he could not have taken the same decisions”. He was “very strong” on the point that he would “certainly not go along with the suppression of prosecutions in the case of perversion of justice”.

Incidentally, Havers had asked for strict confidentiality and specifically “not to convey these comments on our ‘Needham machine’ ”.

This was a reference to the NI minister Richard Needham’s closeness to Ryan. When they next met, Needham had said that Tom King believed the Mayhew statement had “got everything wrong”.

Ryan reported to Dublin that he had permitted himself to suggest that Mayhew’s statement “was ‘slick’ in its construction” and that Mayhew was indifferent to its impact on Anglo-Irish relations. Needham did not disagree. He looked him “straight in the eye” and said: “Mayhew has the lady behind him.”

Ryan took this not to mean that Thatcher agreed with the detail of Mayhew’s approach, but “rather that he knows he enjoys her full confidence and knows that she will back him – as she did on extradition”.

In other reports, Ryan recorded an overwhelming unwillingness among Conservative MPs to publicly dissent from Mayhew’s statement. Even “our very strong supporters were not in a mood to argue for prosecutions”. They believed implicitly in Mayhew’s judgment.

In February, Ted Smyth, who specialised in media relations in the London Embassy, had lunch with Thatcher’s press secretary, Bernard Ingham. Smyth reported something that he had not before detected – what he termed a “lack of faith or confidence in the Anglo-Irish Agreement”. He assumed that Mayhew’s hostility to Irish extradition proposals had “infected Downing Street and stirred up real anger towards us”.

And he advised that efforts would have to be made “to outflank Mayhew” and to show that extradition could work and “bring home to the British privately and publicly how much they have gained from the Agreement”.

Another report came of the views of Nicholas Scott, a longtime confidante and a minister in the Northern Ireland Office; he is reported to Dublin as believing that Mayhew “wants to damage the Agreement”. He added that Mayhew “very much wants” to be the next Northern Ireland secretary but, Scott asked, would he not prove “unacceptable to Dublin”?

In the event it was Peter Brooke who succeeded Tom King as Northern Ireland secretary; but in 1992 Mayhew did realise his ambition and proved to be the longest-serving secretary, who was responsible for early clandestine talks with the IRA and for paving the way for the Belfast Agreement.