Haughey insisted Mitterrand stop off at his home for champagne 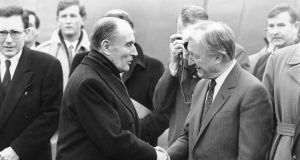 Charles Haughey demanded a personal visit by François Mitterrand to his north Dublin mansion be included in the itinerary only three days before the French president arrived in Ireland.

Haughey never disguised his enormous admiration for the French socialist politician. Documents show that the then taoiseach pulled out all the stops for the president’s state visit to Ireland in February 1988.

He gave the French president the gift of a valuable painting by Louis le Brocquy – a portrait of Samuel Beckett’s head – to mark his visit to Dublin. The president returned later that year to holiday with Haughey on his private island, Inisvickillaun, off the Co Kerry coast.

A note written by an official in the taoiseach’s department disclosed Haughey made the proposal that Mitterrand visit Abbeville, his Gandon mansion in Kinsealy, Dublin, on February 22nd, only three days before the arrival.

The official notes the proposal was made “when the programme for the visit had been drawn up and agreed by the French side”.

Haughey said it could occur while the French politician was returning from a visit to the passage grave at Newgrange to the French embassy in Dublin.

When the idea was put to the head of French protocol, he replied it would not be possible to confirm the change until Mitterrand arrived in Ireland.

A planned visit to Portmarnock Golf Club and beach was dropped to facilitate the proposed Abbeville stop-off, for which two Puma helicopters would be required.

The Irish Air Corps said it was “operationally feasible” to land the helicopters on the back lawn of Abbeville. That was confirmed by Ciarán Haughey, a son of the taoiseach, himself a helicopter pilot.

An official visited Abbeville on the eve of the proposed visit there, and met Haughey’s wife, Maureen Haughey, to make tentative arrangements.

“The Taoiseach indicated he required a red carpet to be in position at the back lawn. One was obtained from Aer Rianta,” noted the official.

Haughey ensured the visit was added by mentioning it to the French president as soon as he arrived in Dublin. Mitterrand said he would be “happy to accept the invitation”.

The party arrived in two helicopters on Thursday at 5.15pm, almost half an hour late.

“That was because programmes over-ran at Newgrange and at Monasterboice. The president did not curtail the time he spent in Abbeville and left at 5.45pm. The proposed walk of the grounds did not take place because the weather had turned very cold.”

The taoiseach presented the le Brocquy painting during the visit. Mrs Haughey offered champagne to the guests but no food. No media was present.

The official noted that because two helicopters had landed “the group at Abbeville was rather large for the dining room. It would have been more desirable if only one helicopter had been used”.

It was noted the ballroom could not be used because wedding presents belonging to Haughey’s daughter, Eimear Mulhearn, were stored there.

For the State dinner at the Royal Hospital Kilmainham, the music was provided by soprano Bernadette Greevy and by the traditional group De Danann, led by Frankie Gavin. Haughey’s select guest list featured some of his prominent business friends including John Mulhearn, Des Traynor, Larry Goodman, Dermot Desmond, Michael Smurfit, Ben Dunne and property developer John Byrne. Among the other guests were broadcaster Gay Byrne and poet Brendan Keneally.

Among the other gifts considered was a Waterford glass oval fruit bowl (£567). No value was given for the Beckett painting – one of a series of portraits le Brocquy did of the playwright which have fetched prices from a few thousand euro to as much as £400,000 (€492,781) at auction.

Both leaders held a one-to-one meeting where Haughey tried, without success, to persuade Mitterrand to allow Ryanair fly between both countries.

“We are very anxious to develop the European tourist trade with a specialist (tourist) type from France,” said Haughey, adding that this would require the best possible access and air services.

At the time there were 200,000 French visitors to Ireland each year but Haughey noted: “Unfortunately the numbers are falling because the air fares are too high.”

According to a record of the meeting, Mitterrand replied: “But you have so many writers and so much literature to attract people.”

“We can’t compete with the mass tourism of Spain and the sun countries,” said Haughey.

Mitter rand said: “But there are so many books. I have come here myself. I have spend peaceful days among the reeds. There are wild geese.”

To which Haughey replied: “But the wild geese go to France.”

Ryanair had been refused permission to use Beauvais airport because it was not in an Ireland/France air agreement. Irish authorities were trying to get Ryanair access to Orly airport which was covered. It was clear from the meeting that Mitterrand did not want to engage with Haughey on the issue.