Analysis: Records suggest she was irascible on Ireland, shallow and very often uncertain on detail 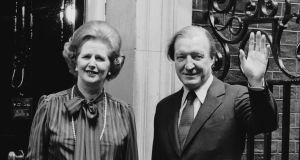 Margaret Thatcher published her memoirs in 1993, whereas Haughey (pictured with the former British prime minister in May 1980) never wrote his. Photograph: Keystone/Getty Images

That the official records from the Department of the Taoiseach and of Foreign Affairs for 1988 are becoming available only now after 30 years leaves the Irish side playing “catch-up” in Anglo-Irish relations.

The British have long since begun their incremental switch from a 30-year rule to a policy which will eventually have them open all records after 20 years.

And they have already released papers covering Margaret Thatcher’s demise, John Major’s accession, the tenure of Peter Brooke as Northern Ireland secretary and, on the Irish side, the replacement of Charles Haughey by Albert Reynolds.

That Irish documents are not released simultaneously with the British causes difficulties for historians in reaching a rounded understanding of Anglo-Irish relations.

In any consideration of the Haughey-Thatcher relationship there is the further complication that Thatcher published her memoirs in 1993, whereas Haughey never wrote his.

There’s a hectoring tone in her memoirs which distorts the reality of Anglo-Irish relations. She scolds Haughey for his “thoroughly unhelpful attitude” and his “astonishing” speech in the US in April 1988 which she characterises as “a shabby case of playing to the American Irish gallery”.

She ignores the content of his aide-memoire – reported in these pages on Friday – with its rebuke from Haughey that she had better allow him to be the best judge of shaping Irish policy.

And when Haughey reaffirmed “in the strongest terms” his opposition to terrorism, and repeated his commitment to the Anglo-Irish Agreement she invites her readers to join with her in her delusion that he is responding to a “sharp letter” from herself.

She claims that they concluded their summit meeting in Hanover without “any ill will or rancour”. And then surprised many readers when she wrote that she felt that she “understood him better than I had before – and better perhaps than I ever did Garret FitzGerald”.

From Irish files of earlier years she had come across as a chameleon who seemed impressed by whoever she had spoken to most recently. There is nothing in the 1988 Irish papers to contradict this earlier impression that on Ireland she was irascible, shallow and very often uncertain on detail, which she would attempt to conceal with self-righteousness.

Indeed Richard Ryan at the Irish Embassy in London seemed to liken her to a stubborn mule when he wrote of her during the protracted and difficult negotiations on the original Anglo-Irish Agreement, that she had “sat down between the shafts several times” and had to be “goaded forward toward the line” by Geoffrey Howe, her cabinet secretary Robert Armstrong, and others.

He suggested that had “a really powerful Unionist voice” – he instanced Lord Hailsham – been there to counsel her, she would never have signed the agreement but that Armstrong had “kept such voices out and effectively sealed her in, against her own instincts, with persuasive voices, Irish and British, urging her in only one direction”.

Haughey had also been a reluctant convert to the agreement. His record on it is riddled with contradictions and he is a master of spin and revisionism. Commenting to Thatcher on the agreement, he even claimed that it had been built “on the structures for closer co-operation between our two countries which you and I envisaged at our two meetings in 1980”.

He allowed that in opposition he had been “critical of some aspects of the agreement”. He passed over that his initial response had been to excoriate it as treasonable, partitionist and unconstitutional.

But Haughey said he now had an obligation to work the agreement. Not only was this a legal and moral imperative since as taoiseach he had inherited a binding international treaty. But he must also have quickly appreciated that the agreement was part of the furniture in Anglo-Irish relations.

He must have been impressed too by the civil service team he had inherited on Anglo-Irish relations. Many belonged to a generation of specialists who had been recruited and promoted by Garret FitzGerald. Some indeed were personal friends of his.

One would not expect, of course, to find traces in such official records of how the professional diplomats on the Irish side considered the replacement of FitzGerald by his arch rival – not least on Northern Ireland policy – Haughey. The officials’ approach to Haughey was now that of apolitical professionals.

At one stage Noel Dorr as secretary of the Department of Foreign Affairs does point out to the British ambassador Nicholas Fenn that Thatcher’s complaint that Haughey was dining à la carte on the Anglo-Irish Agreement, was “politically short-sighted”. Rather London should give the Haughey government “which came to the table after the menu had been selected, full credit for keeping to it so well”.

But whereas Thatcher wished to rely on the agreement simpliciter, Haughey was invariably keen to widen the agenda.

Throughout 1988 he talks about drawing unionists into discussions with Dublin. When the British ambassador Nicholas Fenn explicitly asked him his motives, Haughey replied: “I don’t know. I am playing it by ear. I am using some key words because Molyneux used them. In a way I am trying to send messages subliminally. There is no more to it than that.”

But later in June the government secretary, Dermot Nally, in a note of a meeting with officials from both sides recorded the British view that the unionists merely wanted Haughey “to say or do something to scuttle the agreement. That was their sole purpose in the present dalliance.”

Reading the files for 1988, Richard Ryan again emerges as an indefatigable harvester of gossip from within the Westminster elite on all aspects of Anglo-Irish relations in the wake of the Anglo-Irish Agreement, by then almost three years old.

He advised Dublin that due to her simplistic analysis, Thatcher had isolated herself from what was a new more relaxed consensus among British ministers, officials and indeed the public. This was a belief that “the Irish as a whole were a fairly decent lot” who disliked terrorism as much as the British, and would help to fight it; that the unionists had historically mistreated the Northern nationalists “and deserved the agreement” – indeed their inability to comprehend it “bore out their awfulness”; and, moreover, that if as a result of the agreement the violence faded from British television screens and it all “led to unity in Ireland at some point in the future, well and good”.

* Dr John Bowman is a broadcaster and historian. His latest book is Ireland: The Autobiography (Penguin).