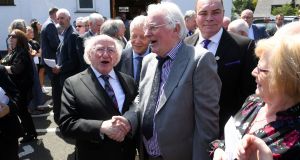 “There was an ability to take risks in him which I admired,” said Mr Higgins, who was one of hundreds of mourners to pay tribute to Mr Cooper at St Peter’s Church on the Culmore Road.

“I think to his very last breath Ivan believed in hope and believed in possibility and believed, in fact, in taking the pieces of hope and turning them into something positive for everybody in a very inclusive way.

“There’s something singular about the courage he had, and it’s a courage he wanted to share,” Mr Higgins told The Irish Times about the man who co-founded the SDLP.

Describing Mr Cooper as a “towering figure” who was “ahead of his time”, the Archdeacon of Derry, Venerable Robert Miller, called on mourners to “finish the job” to which he had dedicated most of his life.

“To celebrate his life,” he said, “we must echo his voice, and be utterly, unequivocally committed to a peaceful resolution of the conflict in Northern Ireland.

Mr Cooper, who died on Wednesday at the age of 75, was a prominent member of the civil rights movement which emerged in the North in the 1960s. A member of the Church of Ireland and, briefly, a Young Unionist, he felt compelled to protest against the discrimination he witnessed as a shirt factory manager in Derry.

Referring to criticism he faced from within the Church of Ireland, Archdeacon Millar said: “In life, Ivan was regarded as a controversial figure, even divisive in some people’s eyes. But that didn’t stop him. He believed – he was convinced – he had right on his side.”

He was among the marchers who were attacked by the police on Duke Street in Derry on October 5th, 1968, often regarded as the beginning of the Troubles.

Many former civil rights campaigners were represented at the funeral, wearing the black and white badges depicting an oakleaf that were the symbol of the civil rights movement in Derry.

They watched in silence as the coffin – draped in a black and white civil rights banner – was brought inside St Peter’s Church.