Taoiseach stresses desire to not fall out with Scotland over Rockall 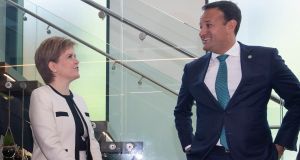 ‘We don’t accept that an uninhabitable island can have a 12-mile limit around it,’ said Leo Varadkar, above with Nicola Sturgeon. Photograph: Danny Lawson/PA Wire

Higher than usual levels of fishing by Irish and other EU vessels around Rockall is one of the concerns of the Scottish government in its dispute with Ireland over the tiny islet, Taoiseach Leo Varadkar has said.

Mr Varadkar and Scottish first minister Nicola Sturgeon held a meeting on Friday on the margins of the British-Irish Council in Manchester.

It is the first time the pair have met since the dispute flared up earlier this month, although Mr Varadkar said they had spoken on a number of occasions.

Scotland has threatened to take enforcement action against “illegal activity” by Irish vessels fishing within the 19km zone around Rockall, which is 420km northwest of Co Donegal.

Speaking after the meeting, Mr Varadkar said he and Ms Sturgeon agreed that ministers from each of their governments would engage on the issue and “report back to us at the end of July and we’ll take things from there”.

“One of their concerns is that there has been an increase in fishing by Irish and EU trawlers in recent years, much higher than historical levels, but our view is that our fishermen have the right to pursue EU quota in those waters.”

Ms Sturgeon said: “On Rockall, there have been constructive discussions between our officials in last two weeks and these will continue. Our ministers will report back by end of July.”

She also said she and the Taoiseach “reflected on the strong Scottish-Irish relationship” at their meeting. They also discussed co-operation in education as part of the Common Travel Area.

Mr Varadkar said they both agreed on the need to avoid a dispute on Rockall.

“We’re very conscious that we’re heading into Brexit – deal or no deal – and in both scenarios the rules and regulations and laws around fisheries are going to change so, you know, we’re seeing that in that broader context too that we want to be united and together on Brexit and not falling out over issues such as Rockall.”