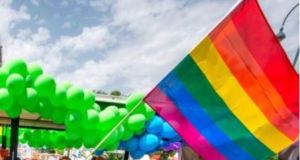 The Dublin Pride parade will be led out by more than 70 LGBTQ organisations. File photograph: Getty Images

The weather gods are set to smile on Dublin Pride on Saturday when tens of thousands are expected to take to the streets to mark the city’s 26th annual Pride parade.

This year’s theme is Rainbow Revolution, with organisers predicting it will be the biggest and most colourful Pride parade ever seen in the capital.

The parade will start on O’Connell Street at 1pm and will move on to Eden Quay and pass Liberty Hall, where the first large-scale march for LGBTQ+ rights in Ireland began in 1983.

It will then cross the Liffey at Talbot bridge, move along City Quay toward Westland Row and end with a free outdoor event in Merrion Square until 7pm.

The parade is one of the biggest free events in the country and will be led out by more than 70 LGBTQ+ organisations and community groups, although everyone is being invited to join in or just come along to watch.

The Pride rainbow flag, which will fly over Leinster House for the first time, is just one of the firsts being marked this year.

The civil and public service will take part in the parade for the first time, marching under the banner Proud to Work for Ireland.

Joining the parade will be representatives from all Government departments, the Garda Síochána, the Defence Forces, the Central Bank, Revenue and many other agencies of the State.

They will be joined by representatives of the Police Service of Northern Ireland (PSNI). It will be the first time PSNI officers in uniform have taken part in Dublin Pride. Over the past few years, gardaí have participated in Belfast Pride. The Garda Representative Association is also taking part in the parade for the first time.

Other businesses and organisations taking part in the march include the Red Cross, the Catholic Guides of Ireland, the Union of Students in Ireland, Amnesty International, the Irish Cancer Society, Twitter, Google, An Post, Tesco, the GAA and Dublin Bus.

Dublin’s first large-scale pride parade was held in June 1983 when about 900 people marched from Liberty Hall to Fairview park.

It followed the death of Declan Flynn (31) who was beaten to death by a gang of five “queer-bashing” teenagers in Fairview Park in 1982. The 1983 march through the city centre is seen as the catalyst for the gay-rights movement in Ireland.

Those attending Saturday’s parade and other Pride events are advised that only small bags measuring no larger than A5 will be allowed due to security concerns. Those with mobility issues are encouraged to join the parade at City Quay/Lombard Street, and there will be two accessible viewing areas – one outside the GPO and the other at the raised Luas stop outside the Gresham hotel. Dublin Bus will also provide a “Rainbow Bus” for anyone with difficulties walking the route.

AA Roadwatch has confirmed a number of routes around the city centre will be closed to facilitate the parade.

Diversions will be in place between 11am and 6pm on a number of Dublin Bus routes, and some Bus Éireann services travelling to and from Dublin will also be diverted due to road closures. All information on diversions can be found on the transport company websites.

There will be no Luas service on the green line between Dominick and St Stephen’s Green between 11am and 6pm.

A series of festival events will take place around the city to mark Pride weekend. On Saturday, Panti Bar on Capel Street will hold its annual free-all-day Pride street party, while a non-alcoholic event will be held at nearby Outhouse.

The Mother Pride block party will start at 4pm at the National Museum of Ireland, while the Victoria and Davina Pride Party will kick off from 7pm in Vicar Street.

Sunday will see the National Gallery hold an LGBTQIA+ tour of the national collection at 2.30pm, while the George Pride closing party will start at 9pm on South Great George’s Street.