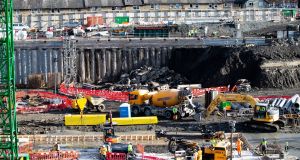 The construction site of The National Children’s Hospital. Photograph: The Irish Times. 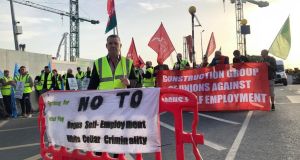 Construction workers picketing the new national children’s hospital on Friday as part of a protest over alleged “bogus work practices” on the site.

Construction workers picketed the new National Children’s Hospital on Friday as part of a protest over alleged “bogus work practices” happening on the site.

The Irish Congress of Trade Unions led the picket over claims a subcontactor on site is employing workers on “bogus self-employment contracts”.

The chair of the ICTU’s construction industry committee Billy Wall said the construction sector is regulated by sectoral employment orders laid down in statutory instrument 455 of 2017. This requires all building employees to be paid via PAYE.

Mr Wall said the subcontactor allegedly involved is employed by Bam, the main contractor on the controversial €2 billion hospital.

This contractor could not be reached for comment on Friday.

Mr Wall estimated up to 100 workers on the hospital site have been hired via self-employment contracts. Under these contracts employees are required to work as self-employed and pay their own tax, insurance and pension contributions.

Mr Wall said: “This contractor was paying for them from 8am to 4.30pm on a pre-determined wage. How can you be a self-employed person if your wage is being pre-determined and you can’t earn as much money, or as little money, as you wish?”

The demonstration involved a number of unions including SIPTU and the Building & Allied Trades’ Union (Batu).

Siptu construction sector organiser John Regan said the State is losing up to €300 million in tax and PRSI as a result of bogus self-employment arrangements across the State. He said such contracts also result in workers being denied key rights and safeguards.

“The costs are paid by these workers, good employers, the State and society.”

Bam said it was not aware of any breaches of employment law on site and said if there was a breach it would “move swiftly to address it”.

It said Bam fully complies with all employment legislation and “operates to the highest standard on all its sites”.

The company added: “BAM has engaged a compliance officer on the New Children’s Hospital site to ensure full alignment with legal requirements.

“It also works with an independently audited labour law compliance process operated on the site in conjunction with the other major contractors.”