What has been proposed and can Eir deliver NBP for €4bn less than the Government? 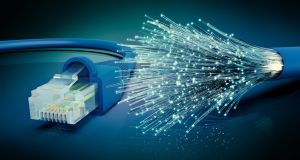 The Eir claim was like ‘they pulled the pin out of the grenade and rolled it into the room,’ according to committee member and Green Party leader Eamon Ryan. Photograph: iStock

What has been proposed?

Earlier this week, Eir told a sitting of the Oireachtas communications committee it could complete the National Broadband Plan (NBP) for under €1 billion. This compares with the projected final cost of the Government’s plan of up to €5 billion, with €3 billion coming from the taxpayer.

Given the extraordinary political pressure around the NBP, it was a bold move. In the past eight months the rural broadband plan has survived the political firestorm of Denis Naughten’s resignation and a full frontal assault from Robert Watt, the State’s top spending mandarin.

In this context, the Eir claim was like “they pulled the pin out of the grenade and rolled it into the room,” according to committee member and Green Party leader Eamon Ryan. In fairness to Eir, it has consistently intimated that it could have delivered rural broadband more cheaply - but by putting a figure on it, they brought affairs to a head. In doing so, they have unleashed the latest existential threat on the NBP.

How would they achieve it?

Eir’s key argument is that it can deliver the objectives of the NBP for around €1 billion, based on their experience of rolling out broadband commercially to 300,000 premises. This is different to delivering the NBP as currently constituted by the Government. They would keep costs down by stripping out elements of the plan they see as unnecessary, such as establishing a separate legal entity to administer the service and changing service level agreements that affect things like response times to customers, which they say are too onerous.

The department has always argued that a separate legal entity improves transparency and oversight of the process, ensures compliance with State aid rules, and improves the State’s chances of clawing back future profits if the opportunity arises.

Effectively, part of the price of admission for a cheaper NBP is a lower standard of oversight. That will make civil servants incredibly nervous, but as Eamon Ryan says, “is it worth €2 billion to get that level of oversight over the line?”

The real claimed cost savings are elsewhere; Eir has said it would strip out €900 million it would be due from National Broadband Ireland (NBI) for use of its poles, but industry figures and the department are concerned that this could present regulatory and competition law issues. There is also the cost of connection, which is higher through Eir at €170 than the €100 NBI plans to deliver. Eir’s plan also charges €170 to providers every time someone “migrates” - or changes broadband provider. An industry analysis seen by The Irish Times suggests this happens every three and a half years, meaning that across 21 years, a single connection would give rise to fees of €1,190, rather than €100 under the NBI. Across 400,000 customers, this equates to €476 million, versus just €40 million. Providers will recoup this from consumers. Eir will correctly point out that the price they can charge people is regulated, but this would suggest that while taxpayers could save under the Eir plan, consumers may pick up the tab longterm. And they, of course, are the same people.

Is it a credible offer?

Eir is rolling out commercial broadband services using this model to people in rural Ireland already, so clearly it is possible. Donal Palcic, an economist at the University of Limerick, has been a long time critic of the NBP. “On the face of it, it does seem credible,” he says. However, implementing it could be more challenging. If the Government were to back out of its deal with Granahan McCourt, the risks would be huge, according to Mr Palcic. “I would really question how legal it would be to cancel this tender and re-tender for a different model that suits Eir, which only one company would bid for,” he says. Industry sources have also criticised it strongly, arguing it consolidates Eir’s power and is motivated entirely by the company’s self interest.

From what we know, Eir’s proposal seems credible. Whether it is practicable in the wider context of the NBP is another story.

What are the politics of this?

In a word, toxic. The Government has no alternative but to examine the proposal put forward by Eir, but is enraged that it has to at this precarious point in the process, lest it be accused of walking away from a better offer. Eir, for its part, does not believe the Government will engage in good faith, and is more interested in ways to discredit its approach.