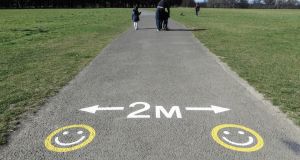 The Social Impact of Covid-19 Survey indicated strong support among the Irish public for Level 5 restrictions with 71 per cent of people saying they are appropriate. Photograph: iStock

Less that 40 per cent of the Irish population believe that life will return to normal in the next year despite the recent vaccine announcements, according to a new survey.

The Central Statistics Office (CSO) household survey show that less than 7 per cent of the population believe life with return to normal in the next six months and a third (32.5 per cent) believe it will happen in the next year.

The survey was carried out electronically by the CSO among 1,585 individuals nationwide. Crucially it was carried out between November 12th and 18th. The Pfizer announcement that it has created a vaccine with 95 per cent efficiency was announced on November 9th.

The Social Impact of Covid-19 Survey indicated strong support among the Irish public for Level 5 restrictions with 71 per cent of people saying they are appropriate.

Some 18.3 per cent of people thought the restrictions were too severe and 10.2 per cent believed they did not go far enough.

Despite the support for Level 5 restrictions, the numbers of those who rated their compliance as high is now 65.2 per cent in comparison with 75.4 per cent in August.

The rate for “high” compliance was lowest in June (59.9 per cent) when the country was just about to enter Phase 3 of the roadmap for reopening society and highest in April (80.6 per cent) approximately a month after initial Covid-19 restrictions were implemented.

The current restrictions enjoyed universal support among all age groups with those over 70 were the most enthusiastic with 88.2 per cent in favour.

Conversely, the likelihood of a respondent feeling that the Level 5 response was “too extreme” decreased with age, falling from 23.1 per cent for those aged 18 to 34 to 5.2 per cent or those aged 70 years and over.

The toll taken by Covid-19 on people’s mental health is apparent in the research especially among young people.

Somewhat surprisingly given the focus on the isolation of the elderly, those aged 18-34, were most likely to feel lonely “all” or “most of the time” with more than one in four (25.6 per cent) feeling this way.

The survey also found that there were good aspects to the lockdown. Some 28.7 per cent of people spent more quality time with the people they live with, 19.4 per cent of workers spent less time commuting and 18.8 per cent said their finances improved.