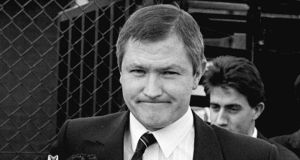 Taoiseach Micheál Martin confirmed contacted British prime minister Boris Johnson urging him to accede to the request for an inquiry into the killing of Pat Finucane (pictured). File photograph: Pacemaker

The Finucane family are due to hear on Monday whether the British government will authorise an independent public inquiry into the 1989 murder of Belfast solicitor Pat Finucane.

In 2001 the British government made a commitment that such an inquiry would be held into the Ulster Defence Association (UDA) murder of 39-year-old Mr Finucane who was shot dead in front of his family at their home in north Belfast.

But instead of an inquiry the then British prime minister David Cameron commissioned a review of the murder by British lawyer Sir Desmond de Silva QC.

In 2012 the lawyer reported that agents of the British state were involved in the murder and that it should have been prevented. Sir Desmond said there had been “no overarching state conspiracy” in the killing.

Mr Finucane’s widow Geraldine dismissed the report a as “a sham... a whitewash... a confidence trick”.

The British government made a commitment that by the end of November it would give a definitive statement as to whether a full inquiry would be held.

The Northern Secretary Brandon Lewis is expected to make an oral statement about the matter in the House of Commons on Monday.

The British government has come under considerable pressure in recent weeks to order such an inquiry.

On Thursday, Taoiseach Micheál Martin confirmed that he had contacted British prime minister Boris Johnson urging him to accede to the Finucane family request.

Four of the North’s six main parties – Sinn Féin, the SDLP, Alliance and the Greens – also demanded an inquiry as did 24 members of the United States Congress who wrote to Mr Johnson calling for him to sanction an independent investigation into the killing.

Mr Johnson has also faced pressure from Conservative MPs to resist demands for such public inquiries.

Mr Lewis, in a written statement to the House of Commons in March, said he wanted to end “the cycle of reinvestigations into the Troubles in Northern Ireland that has failed victims and [British army] veterans alike”.