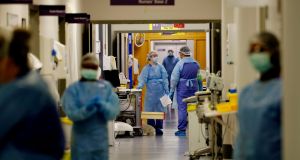 There is a general acceptance at the top of the health service that a decision by the then government in October 2012 to cut the pay of hospital consultants appointed after that date by 30 per cent created a barrier to recruitment and has contributed to the current manpower problems.

While there have been several initiatives to ameliorate the situation, representative bodies maintain medical specialists appointed since then can still earn €50,000 a year less than longer serving colleagues.

Medical organisations claim the pay differential has led to Irish doctors, who traditionally go abroad to undergo part of their specialist training, opting not to return.

Minister for Health Stephen Donnelly is a critic of two-tier pay arrangements, but simply rectifying the current position is not straightforward.

It is complicated by the Government’s own overall health reform objectives, particularly the future role of private medicine in the public health system and the overall politics of public service pay determination.

Unlike general practitioners, for example, hospital consultants are direct State employees. However, there is a patchwork of contracts in place – each with their own rights, restrictions and pay levels, some dating back decades.

Some contracts stipulate that the consultant must exclusively treat public patients, others permit fee-paying patients to be seen only in public hospitals while others allow work in off-site private hospitals.

Ireland in the past has been able to punch above its weight in attracting consultants, in part by offering private practice opportunities over and above the public salary. Given that about half the population is covered by health insurance, the private medicine market in some specialities can be very lucrative.

However, under the Sláintecare health reforms, private practice is to be ended in public hospitals.

Last December, the then government decided that all consultants appointed in future would be on a new higher paid Sláintecare contract which would permit them to treat public patients only. The Department of Health said under this contract, pay would be set at €222,460, rising to €252,150 by July 2022.

Consultants with existing contracts providing for private practice rights would be allowed to transfer to the new arrangements. Essentially this was the way the then government proposed to deal with the two-tier pay system.

However, for those consultants with private practice rights who were appointed after autumn 2012 and who wanted to keep these arrangements, there did not appear to be any mechanism to secure pay equality.

The Sláintecare contractual arrangements were supposed to come into effect in the first part of 2020. But the Covid-19 pandemic intervened and, publicly at least, there has been little movement since.

In September, the Cabinet announced changes to legislation that would facilitate the introduction of the higher paid contracts for consultants but it has not yet been enacted.

The Government will have to enter talks with the Irish Medical Organisation and the Irish Hospital Consultants Association on any Sláintecare contract. Whether these two rival representative organisations would want the two-tier pay issue to be addressed for all remains to be seen.

Another issue would be how any initiative to end the two-tier pay system for consultants would interact with the Government’s overall public service pay strategy.

Two-tier pay is not only an issue in medicine. It is a matter of huge concern, for example, in teaching and will feature highly in the current public service pay talks.

It is unclear at present whether the Government envisages a standalone deal on two-tier pay for consultants or whether it would form part of an overall public service-wide initiative.