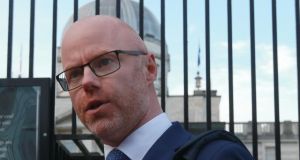 Minister for Health Stephen Donnelly: ‘Notwithstanding amazing progress, the rate is still significantly higher than when we came out of wave one.’ Photograph: Laura Hutton

The State’s response to Covid-19 is entering “uncharted territory” over Christmas, with the risk that cases could grow rapidly, the Minister for Health has said.

Stephen Donnelly said both the National Public Health Emergency Team (Nphet) and the Government were expecting the level of cases to rise from the second week in December, and that a rapid rise could lead to further measures being introduced in January.

“However, we’re in uncharted territory,” he said. “The combination of measures being brought in combined with Christmas is new, obviously. It’s a unique time of year when there’s a lot of socialisation so the level of uncertainty is quite high from everyone.”

Mr Donnelly said the levels of the disease were higher than when restrictions were relaxed during the summer, meaning it could grow more rapidly.

“One of the concerns we all have is we are coming out of restrictions. Notwithstanding amazing progress, the rate is still significantly higher than when we came out of wave one,” he told The Irish Times. “Because the cases are already higher, the modelling suggests that rapid growth will happen much earlier this time.

“The truth is nobody knows precisely what might be required in January,” he said. “Is it possible additional measures will have to be brought in? If cases are in uncontrolled, rapid exponential growth in early January then obviously we would have to review the situation.”

On Covid-19 vaccines, Mr Donnelly said they could be made available to Irish residents early in the New Year. The second meeting of the Government’s Covid-19 vaccination task force takes place on Monday.

Mr Donnelly said the Government had largely adhered to Nphet advice when deciding on reopening. It had extended the ban on household restrictions in order to allow for hospitality to reopen earlier in December, which should slow down the rise in cases, “but then over the two weeks around Christmas, it’s hard to predict”.

As the Government prepares to reopen hotels, retail, hairdressers, churches, gyms and museums on Tuesday, Mr Donnelly said he did not expect to introduce restrictive measures before the end of December. Data released over the weekend suggests Ireland has outperformed much of the rest of Europe when managing the second wave of the virus.

The most recent advice to the Government from Nphet argued that a three-week intervention may ultimately be needed if cases approached 400 per day.

The Department of Health confirmed a further 299 cases on Sunday, and two further deaths linked to Covid-19. A total of 2,052 deaths has been linked to the disease now, and a total of 72,241 infections diagnosed.

Elsewhere, documents released under Freedom of Information laws show Ministers were told before the second lockdown that further restrictions would be needed even if cases were at 100 per day after measures were lifted.

Modelling by Nphet shown during a meeting on October 17th argued that “we will need further interventions but they can be shorter”, according to the documents. The advice, given during a meeting of senior Ministers which immediately preceded the introduction of Level 5, was based on a six-week lockdown introduced from October 9th.

It presumed that, were measures lifted on November 20th, cases would be about 100 per day and then likely grow to about 300 per day by early January, and argued that a three-week intervention may then be needed.