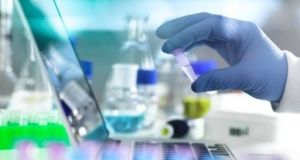 The HSE says it could take until the end of next week to get equipment and reagent from Ireland’s pharma companies into the Covid-19 testing system. Photograp: Getty Images

Ireland’s pharmaceutical industry has indicated it is gearing up to produce key ingredients for Covid-19 testing which the State is struggling to source on the international market.

The industry could produce enough reagent – a key laboratory ingredient which is in short supply – to enable around 500,000 tests to take place, said Matt Moran, director of the pharmaceutical industry lobby group BioPharmaChem Ireland.

He told The Irish Times that he was hopeful of being able to make a firm announcement soon. “We are looking at making it, and are trying to source the raw materials at the moment.”

Similarly to the finished product, the ingredients for reagent are much sought after at the moment. However, Mr Moran said “we are hopeful we might have a solution in the not too distant future”.

The reagents used for the type of testing done for Covid-19 regulate salt and pH levels in tests, and also contain pieces of genetic material which bind to the virus, producing more of it, allowing the indication it is present in the sample.

The State has struggled to secure sufficient supplies in recent weeks, leading to a reduced level of testing of samples in laboratories.

“If we can get this over the line we want to make a significant amount, probably enough to enable over half a million tests,” said Mr Moran, adding that some academic institutions were also involved and they were hopeful of being able to start producing the reagent within days.

“We have the process, we have just about found the raw materials, and it is just about tying down where exactly we make it and then ship it,” he said.

It is understood that Camida and WuXi are among the companies involved in the plan, and a plan is being examined to sell the reagent at production cost or below to the State.

The HSE told Opposition health spokespersons at a briefing on Wednesday that it was in negotiations with two major pharmaceutical companies with large Irish operations – Roche and Abbott – about the role they could play.

The HSE said it could take until the end of next week to get equipment and reagent from Ireland’s pharma companies into the Covid-19 testing system.

Stephen Donnelly, the Fianna Fáil health spokesman, said: “The HSE confirmed to me that it is in negotiations with Roche and Abbott, and it is essential that some portion of Ireland’s large and sophisticated chemical industry is immediately deployed to solve this bottleneck.”