Ireland ‘much better’ at challenging racism than UK or US, Emily Logan says 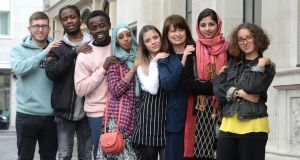 Racism fuelled by populist nationalism is not as significant a problem in Ireland as in certain other countries but “isolated incidents” should serve as an ongoing warning against complacency, the Chief Commissioner of the Irish Human Rights and Equality Commission (IHREC) Emily Logan has said.

Ms Logan was speaking at a Dublin event hosted by the Commission in conjunction with the National Youth Council of Ireland at which more than 120 young people from a diverse range of backgrounds, communities and experiences assembled to discuss how they view racism and intercultural understanding in Ireland.

The event on Saturday featured a range of speakers and the views aired will contribute to the Commission’s independent report to the UN on Ireland’s obligations under the UN Convention on the Elimination of All Forms of Racial Discrimination (CERD) which is to be submitted later this year.

Ms Logan told The IrishTimes that while racist incidents remain comparatively rare in this country, “bystander confusion about how to deal with them when they do occur” was a recurring theme among speakers at the event.

She said that when people stayed silent as others were being racially abused it compounded the sense of isolation and hurt they experienced.

“There is a sense that Ireland is doing much better in terms of dealing with and challenging racism than the US or the UK but there are isolated incidents that have to be addressed,” she said

Ms Logan also serves as Chair of the European Network of National Human Rights Institutions (ENNHRI) representing forty-four national human rights bodies and she said people in other countries were “constantly asking me about what is going on in Ireland. They seem taken aback by the social progression which is evident here particularly when it came to the level of engagement by young people in the two recent referendums.”

She said Ireland had often demonstrated that “we are compassionate people” and cited the outpouring of support for refugees after the publication of photographs of the lifeless body of three-year-old Aylan Kurdi who was washed up on a Turkish beach in 2015.

The little boy had drowned at sea after he and his family had attempted to flee the conflict in Syria.

However she warned Ireland was not immune to the right wing nationalists and racism but said it was “on a smaller scale than we have seen elsewhere”.