Mother of student paralysed in assault thanks Ireland for support 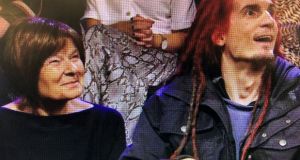 Guido Nasi with his mother Simonetta on the Late Late Show.

The mother of an Italian student who was attacked in Dublin’s Fairview Park 20 years ago this July and left with catastrophic and life changing brain injuries has written a letter of thanks to the people of Ireland for their support after the assault.

Guido Nasi was just 17 when he travelled to Ireland for an English language course in the summer of 1999.

The student, who had a dream of becoming an astrophysicist, was robbed in the north Dublin park on a Thursday evening at the end of July.

When he tried to retrieve his wallet from the thieves, he was struck on the back of the head with a half full bottle of beer by James Osborne, a man who lived nearby.

He suffered a catastrophic brain injury and has been unable to speak or walk since. He has required full-time care ever since and his condition has been likened to advanced Parkinson’s Disease.

He was recently moved to a care centre for younger people in Turin.

Osborne of Forth Road, East Wall was jailed in 2001 after pleading guilty to recklessly causing serious harm to Guido on July 29th, 1999. He was released from prison more than 10 years ago.

Guido appeared on The Late Late Show on Friday night alongside his mother Simonetta.

She does not speak any English so the letter she had written to Ireland was read out by Bernadette Kelly, a member of the Irish Tourist Assistance Service (ITAS).

“I do not think about why this happened,” she wrote. “I just think about how can I help Guido to accept his new condition, with all his dreams still alive in his head.”

She said it was “not easy. It’s difficult to plan a future when it is so completely different from what you had imagined.

She added that the reason Ireland was so important to her and her family was because the country “helped us to survive this tragedy, to accept life, to help Guido to believe in his remaining capacity. She added that there were “no words” to show her gratitude to the people of Ireland.

“We felt a great big hug from young and old,” she continued. “Thank you all for everything. It has been a pleasure knowing such a wonderful country,” she said.

Ms Kelly also told Late Late Show host Ryan Tubridy that Simonetta has been diagnosed with pancreatic cancer, although she said the prognosis at present was chronic rather than terminal.

He will meet President Michael D Higgins on Monday in Áras an Uachtaráin at an event to mark the 25th anniversary of the ITAS.

It was set up in 1994 to offer immediate support and assistance to international visitors who experience crime and other traumatic incidents while visiting Ireland.

The organisation and Ms Kelly assisted Guido and Simonetta in the immediate aftermath of the attack.

Over 17,000 tourists from 110 countries around the world have been assisted by the service since it began in 1994, with nine out of 10 tourists on average continuing their holiday after ITAS intervention. Over 90 per cent of the crimes perpetrated against tourists accessing support from the service are theft related.