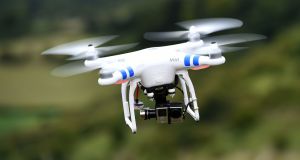 The parcel, dropped by drone, was caught in netting above the prison’s exercise yard. File photograph: Andrew Matthews/PA Wire

An attempt to smuggle drugs into Mountjoy Prison using a drone was intercepted by prison officers last Friday, the Prison Service has confirmed.

A spokesman for the Irish Prison Service said that staff responded to the attempt by removing prisoners from the area, and then proceeding to retrieve the contraband from netting which is strung above the prison yard to frustrate such attempted drug drops.

There has been “an increase in the use of drones over the last couple of years and measures are in place to counteract same,” a Prison Service spokesman said.

Additional measures employed alongside nets range from increased patrols and camera monitoring. The installation of infrared and motion sensor cameras is planned to commence shortly.

“The Irish Prison Service are also exploring a number of technology options to deal with the problem,” the spokesman said.

The Prison Service has rolled out an enhanced programme of intervention measures aimed at cutting down on the use of illegal and banned drugs by inmates after random searches of cells and their occupants uncovered significant quantities of contraband in recent years.

“Concerted efforts are made on a continuous basis to prevent the flow of drugs into our prisons by, for example, the installation of nets over exercise yards, vigilant observation of prisoners by staff, enhanced CCTV monitoring, the stricter control of visits and the use of targeted and random cell searches on a daily basis,” the Prison Service said in a statement.

“As well as the introduction of passive and active drug detection dogs and the installation of airport-style security, including scanners and X-ray machines, has helped efforts to tackle the problem.”

It is not the first time a drone has been used in an attempt to drop drugs into an Irish prison. In the summer of 2014, a drone flew into the exercise yard in Wheatfield Prison, Dublin, carrying a consignment of drugs hanging by a string. However, the device, which had a camera mounted on it to aid navigation, struck anti-helicopter wire put in place around the prison exercise yard and crashed.

The anti-helicopter wire had been installed to deter escape attempts being facilitated by helicopter, as occurred in a 1973 breakout of IRA prisoners from Mountjoy.