Australian firms now looking to Ireland for an EU base, says Julie Bishop 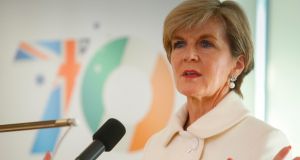 Ireland is set to benefit from Australian companies seeking access to the EU after Brexit, Australia’s foreign minister has said.

Julie Bishop told The Irish Times that the uncertainty surrounding Brexit presented a “real opportunity” for Australian firms to look to Ireland rather than Britain for access to EU markets.

“Ireland has a very attractive business environment, low corporate tax rates, [a good] lifestyle and there is the connection between Australia and Ireland.

“There are similar regulatory systems and similar legal systems. There is an ease of doing business here that would be attractive to Australian investors. I would see firms in Australia as having real potential in that regard.”

She described Ireland as an “obvious partner” to do business within the EU. “Ireland is superbly positioned to attract that kind of engagement from Australian business. I see this as a great opportunity of how we, Australia and Ireland, can take advantage of what has occurred in Brexit.”

At a breakfast hosted by the Irish-Australian Chamber of Commerce, Ms Bishop joked that Ireland’s 12.5 per cent corporation tax rate “brings a tear to many a corporate leader’s eye” as Australia was trying to reduce its own to 25 per cent.

She anticipates that Australia will open negotiations this year on a free trade agreement with the EU and that agreement could be reached in two years, despite the difficulties that the Canadians had in reaching a similar deal.

“We have sensed renewed enthusiasm for a free trade agreement with Australia,” she said. “There is enormous political will to conclude this one. I don’t expect it to take years. We have a general understanding of the sensitivities in the area of complementarities. I would hope that we could conclude this one in a relatively short period of time.”

She stressed, however, that a similar free trade agreement with the UK cannot be negotiated until the country exits the EU in two years’ time.

Ms Bishop said the 11 remaining members of the proposed Trans Pacific Partnership will press ahead with “maintaining the principles and the spirit of TPP” in the absence of the United States, which will no longer proceed with it.

“There is an opportunity for the United States to reconsider if we come up with a free trade agreement that is a better deal. There is still a lot of momentum within our region for free trade.”