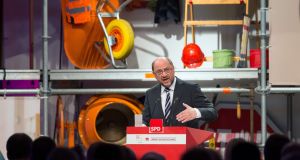 Bielefeld was a strange choice for the burial, a western German city so pleasantly nondescript that satirists have questioned for 20 years whether the place actually exists. But Martin Schulz, the leader in waiting of Germany’s Social Democratic Party, or SPD, nailed Bielefeld to the map this week when he interred the recent past here and pressed the reset button.

Standing before scaffolding holding hard hats, buckets and other building-site equipment – an odd backdrop that looked like the set of a lost Duran Duran video – Schulz delivered a scorching 60-minute diagnosis of Germany’s ills.

“The link between economic efficiency and social solidarity is increasingly being lost,” Schulz, the SPD’s bearded messiah and the man who wants to oust Angela Merkel after 12 years, said. His mantra? “I want there to be fairness in this country.”

Wherever he goes Schulz attracts throaty cheers from supporters and energised grins from party officials. In just a month he has engineered the biggest political upset in years: pulling the SPD up eight points in polls by tapping uncharted wells of fatigue and frustration with, and fear of, Angela Merkel, the economic recovery and Europe’s future in the era of Brexit and Trump.

It’s early days yet, but Merkel could have a battle on her hands to secure a fourth term in September after, this week in Bielefeld, Schulz officially ended one of the longest slumps in support in the history of his 153-year old party.

Under the mutinous gaze of backbenchers, who were aware that this was their political death warrant, Schröder made a final, emotional appeal: “Either we modernise ourselves . . . or we will be modernised by the untrammelled forces of the market that push the social to one side.”

There are two versions of what happened next. Version one: the sick man of Europe roused himself and remains the envy of his crisis-hit neighbours, with steady growth of nearly 2 per cent last year, a historic-low jobless rate of 4.2 per cent and a balanced budget for three years running. Version two: the reforms hollowed out Germany’s marrow, catalysing social division and locking one in five into precarious employment for low wages and zero job security.

But the most insidious toxin in the German body politic is Abstiegsangst, the fear of social relegation, strongest among over-50s, who fear that unemployment means a rapid slide to the bottom, with €400-a-month basic welfare and likely old-age poverty.

And this is precisely where Schulz see his opening, promising this week to tackle “rising social disparity, both real and perceived”, as a result of the reforms.

For 14 years the SPD has been fighting over its Agenda reform rights and wrongs, real and perceived. Schröder loyalists say the reforms were a bitter but timely pill, reviving German prosperity just in time to insulate the country from the worst of the euro crisis. Left-wing critics say the SPD sold its social-justice soul to a neoliberal vampire, who first sucked the party dry and, behind a facade of positive economic data, now continues to drain Germany’s long-term social cohesion.

At first blush Schulz is wielding the garlic and holy water at that vampire, attacking a “neoliberal mainstream that has declared our social market economy to be a hindrance to growth”.

But listen more closely and you hear a promise not of revolution but evolution, to correct unintended consequences of the reforms. “Making mistakes is no shame,” he told the Bielefeld audience. “What’s important, when they are identified, is that they are corrected.”

For Dr Tarik Abou-Chadi, who teaches comparative politics at Humboldt University, in Berlin, the Schulz phenomenon can be explained as a virtuous circle of politics and personality.

Schulz has given the party back its pride and confidence, he says, which in turn makes its politics more attractive to would-be supporters.

“He is not the first to propose reforms of the Agenda reforms, but he’s the first person people trust to deliver,” Abou-Chadi says. “It’s a self-fulfilling prophecy.”

That is what Ruth Müller relates first-hand in a voice filled with pride, hope and enthusiasm. The 50-year-old is an SPD state parliamentarian in Bavaria, a conservative state that is traditionally tough terrain for the party – and never more so in the past decade.

“You’d have people come up expressing their sympathies for being in the SPD, which is never good,” Müller says. But the Schulz effect has been startling, she says: each day brings emails of new party members and a shortage of SPD membership books. “The boost is palpable: people are coming up for the first time saying, ‘Great that you have Schulz.’ ”

Schulz has united the party’s warring left and centrist wings behind him and turned potential liabilities into assets: modest formal education, domestic political experience limited to a spell as mayor in his home town, and a battle with the bottle.

Angela Merkel’s allies have watched the Schulz euphoria in alarm, particularly as one polling agency now gives the SPD a narrow lead over Merkel’s Christian Democratic Union. Is her fourth term at risk?

CDU campaign strategists know they cannot depend on Brand Merkel to do the business as before, given familiarity fatigue, the refugee crisis and related security threats, both real and imagined.

If anything Schulz is an anti-populist, an establishment figure with a rhetorical gift, whose rise has mirrored a slump back to single-digit support for the populist Alternative für Deutschland party.

Schulz, poll analysts suggests, might yet prove a more attractive option than the AfD for all kinds of protest voters: disillusioned SPDers, Merkel critics and nonvoters. With six months until polling day Germany’s federal-election race is still wide open – but, for the first time in 12 years, at least it is a race.

What’s more, Schulz believes he has tapped into a fatigue with crisis-era politics, pushed by the Merkel administration around Europe, that prioritised fiscal prudence over public investment.

Already some here are billing Germany’s September 24th poll as the last chance for European social democracy to retool itself for the 21st century, to appeal equally to the factory worker and the loft dweller.

For Prof Silja Häusermann, a political scientist at the University of Zürich, the greatest challenge for Europe’s left is to win back some working-class votes without alienating the middle class that social-democratic politics helped create 30 years ago.

This will be a balancing act, she says: defending social progress while making a greater universalist push, not into direct redistribution but into social investment: in health, family, schools and a fairer labour market.

“Social-investment policy is not just an proactive answer to structural change in society. It allows itself be linked to an egalitarian social political narrative,” Häusermann writes in a recent Neue Zürcher Zeitung essay.

This strategy can win only as a long-term strategy, she warns, and will not bring back all the working-class male voters attracted now to Europe’s resurgent far-right nationalist parties. “But perhaps they will win back their wives and children.”

It’s still early days, but for now Schulz’s target for the SPD is to occupy the political ground to the left of the Blair-Schröder era and to the right of the Corbynite Labour restoration in Britain.

His promise of evolution, not revolution, aims at correcting errors in Third Way politics, reintroducing state intervention in areas where the market has exploited its new freedoms to cut costs at the price of social cohesion. It’s an ambitious political project, but success in Germany could change the political direction in Europe.

Back in Bavaria Ruth Müller, the local SPD politician, says that the Schulz project is winning new members every day, and two-thirds are under 50: young people worried that the Europe they took for granted is in danger, and parents who want their children to have the perspective and possibilities that they did.

“Brexit, Trump and the far-right shift in Europe have all shaken people, woken them up,” she says. “It’s forced them to think about how things should go from here and to realise that social politics can shape things for the better.”