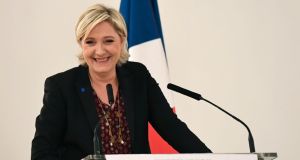 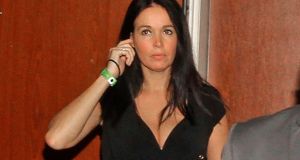 Marine Le Pen, the presidential candidate for France’s extreme right-wing Front National, attempted to burnish her diplomatic credentials this week when she was received for the first time by a foreign head of state, and delivered what she called a “presidential conference” before diplomats in Paris.

Le Pen staged her diplomatic debut in the Salons Hoche auditorium on Thursday evening. The pink marble interior, crystal chandeliers and profusion of white orchids looked every bit as “presidential” as the nearby Élysée Palace.

Party officials claimed diplomats from 50 countries – including China, the US, Iran and Turkey, but not Britain, Germany or Russia – attended Le Pen’s speech on “French foreign policy in a multi-polar world”. Albania, Cambodia, Cuba and Saudi Arabia sent their ambassadors.

Le Pen’s diplomatic outreach is the culmination of a five-year crusade to make the Front National respectable. Earlier this month, she “normalised” her difficult relations with the business managers’ syndicate Medef by engaging in a question-and-answer session with a Medef official at the Salon des Entrepreneurs.

Le Pen’s foreign policy address was briefly interrupted by a bare-breasted member of the Femen group shouting “Marine, fake feminist”. She was dragged out by bodyguards, who locked her in a room.

Le Pen paused briefly, then continued her speech, in which Donald Trump and Putin’s Russia figured as heroes, while “Angela Merkel, Martin Schulz and the other [EU] commissioners” were villains.

Le Pen saluted Trump’s “realism and determination to change things”. His influence was apparent, for example in Le Pen’s intention to withdraw from the integrated command of the “outdated” Nato military alliance.

“We do not hold it against the US president that he asserts the primacy of national interests. That is natural, legitimate and has the merit of frankness,” Le Pen said. “We will do the same for France. ”

The French service of the Kremlin-funded RT station gave the most detailed coverage of Le Pen’s speech, especially her description of Russia as “a decisive element in the balance of forces that can pacify globalisation”. Russia “is no longer the USSR”, Le Pen noted. It had been “treated badly by the EU and a vassalised France”. If she became president, she said, she promised to “moor Russia to the European continent”.

Le Pen reiterated past promises to “finish off the bureaucratic monster” of the EU and “do away with the EU treaties”.

She criticised France’s last two presidents for involving the country in “wars that are not ours, for interests that are not ours” in Libya and Syria. It was a mistake to break off relations with Syrian intelligence, Le Pen said, asking “How many attacks could have been avoided?”

She criticised French intelligence – as Trump criticised the CIA – saying French services were either “incompetent” or “served foreign interests, which is what one calls high treason”.

Earlier in the week, Le Pen was received by Lebanese president Michel Aoun and the former Christian militia leader Samir Geagea, both protagonists in the 1974-1990 Lebanese civil war.

Thibaut de la Tocnaye, an official in Le Pen’s campaign, fought with Christian militias in the Lebanese war, and campaign treasurer Wallerand de Saint-Just was Geagea’s lawyer when he was convicted of a church bombing that killed 11 people.

On leaving a meeting with the Muslim prime minister Saad al-Hariri, whose father Rafiq was assassinated in 2005, almost certainly with the involvement of Syria, Le Pen said she had “told [Hariri] clearly that . . . there is no viable, plausible solution aside from the binary choice between [Syrian dictator] Bashar al-Assad and Islamic State”.

Le Pen refused to attend a scheduled meeting with Abdellatif Deriane, the Sunni grand mufti of Lebanon, because she was asked to put on a headscarf before entering the mosque. She had been warned in advance, but created a scene for television cameras. It was, Front National vice president Florian Philippot said, “A magnificent message of freedom and emancipation to the women of France and the world.”

Le Pen refused to comment on the scandal over her use of EU funds to pay two close assistants who work at party headquarters in Nanterre. Party offices were searched a second time, and computer hard drives seized. Catherine Griset, Le Pen’s friend and cabinet chief of many years, was formally placed under investigation by French judges for “breach of trust”. Le Pen on Friday refused to be questioned by police.

The FN accuses Martin Schulz, the socialist former president of the EU parliament and candidate to become the next chancellor of Germany, and the socialist government of France, of creating the jobs scandal to thwart Le Pen’s campaign.

Le Pen portrays herself and the Front National as victims, and the scandal has had no effect on her popularity. Unlike the conservative candidate Francois Fillon, who hired his wife and children, Le Pen is not accused of personal enrichment.

Nine weeks before the first round of the presidential election, the Front National candidate Marine Le Pen appears stronger than ever.

An Elabe poll shows she would win 28 per cent of the vote in the first round on April 23rd. The conservative Les Républicains candidate Francois Fillon placed second, at 21 per cent, having apparently recovered from a fake jobs scandal.

The independent centrist Emmanuel Macron scored 18.5 per cent, a five-point decline after his controversial statements about French “crimes against humanity” in Algeria and the “humiliation” of opponents of same-sex marriage.

The same poll showed that Macron would defeat Le Pen, 59 to 41 per cent, in the May 7th runoff. Fillon would also defeat her, 56 to 44 per cent.

Macron received a boost when the centrist politician and perennial presidential candidate Francois Bayrou, announcing he would not stand, endorsed him.

If Bayrou’s voters shift to Macron, he should surpass Fillon to face Le Pen in the runoff.

The socialist candidate, Benoit Hamon, tied with the far left candidate Jean-Luc Mélenchon for fourth place, with both on 13 per cent. The green candidate Yannick Jadot, who scored 1 per cent, dropped out to join Hamon’s campaign.

Analysts continue to believe a Le Pen victory is possible. The factors that favour her continuing rise include the country’s long-running social crisis; the jihadist attacks of 2015-2016; EU ineptitude in the face of the migrant crisis and broader dissatisfaction with “Brussels”; unrest in the immigrant banlieues; recurring corruption scandals and the rejection of “elites”.