A study carried out at Queen Mary University of London has shown that bumblebees can learn to use tools to obtain a reward simply by watching other bees. Video: Science 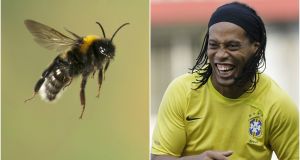 Bumblebees new to this insect premiership can be taught the trick using a demonstrator bee that already knows how to get the reward. Photograph: Getty Images

Match of the day will never be the same. Scientists have taught bumblebees how to score goals in order to win a reward.

The bees are happy to cooperate but do not need a €200,000 Ferrari that they can later crash. A single drop of sugar water is enough to keep them committed to the game.

Bumblebees new to this insect premiership can be taught the trick using a demonstrator bee that already knows how to get the reward.

After several demonstrations the observers also learn how scoring a goal - moving a yellow soccer ball into a yellow circle - can earn them a drop of sugar water.

The research was carried out at Queen Mary University of London and is published this week in the journal Science.

The researchers “wanted to explore the cognitive limits of bumblebees”, said Dr Clint Perry, joint lead author based at the university’s school of biological and chemical sciences.

They decided to challenge the bees with something they would not have encountered before, namely a simplified version of “The Beautiful Game”.

The bees were put through their paces, facing different challenges as they played the game.

One in particular delivered quite profound results, with newcomer bees not only learning the standard trick, but actually improving on it to make getting the reward a bit easier.

This involved placing three balls on the “field”, two of them fixed down and the third a bit further from the goal than the others.

The demonstrator was trained to move only the furthest, unfixed ball, and showed newcomers the trick three times.

In later tests where all three balls were free to move, these untrained bees repeatedly went to the ball closest to the goal, improving on what it had learned from the demonstrator.

“Our study puts the final nail in the coffin of the idea that small brains constrain insects to have limited behavioural flexibility and only simple learning abilities,” said co-author Prof Lars Chittka of Queen Mary’s.

The fact that the bees didn’t just copy the demonstrator but improved on it showed “an impressive amount of cognitive flexibility, especially for an insect”, said Dr Olli J Loukola, joint lead author.

The results suggest many more animals than expected may have the cognitive capabilities to solve complex tasks, Dr Loukola added.