Breitbart’s former troll-at-large is no longer welcome at Cpac. That only shows the American Conservative Union’s double standards 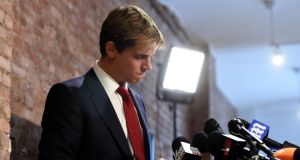 Fallen to Earth: Milo Yiannopoulos resigned from Breitbart after recordings emerged of him defending sexual relationships between young boys and older men. Photograph: Timothy A Clary/Getty

The bizarre rise and swift fall of Milo Yiannopoulos is a modern cautionary tale: that of the offensive liberal-baiting provocateur who flew too close to the sun. This week Yiannopoulos fell to Earth after recordings emerged of him defending sexual relationships between young boys and older men.

Within days the American Conservative Union dropped him from its Conservative Political Action Conference, or Cpac, the publisher Simon & Schuster cancelled a $250,000 book deal and he quit the right-wing website Breitbart.

A mildly well-known blogger in the UK who somehow fell into the orbit of the US alt-right when Donald Trump’s senior adviser Stephen Bannon hired him to become a kind of troll-at-large at Breitbart, Yiannopoulos seemed to realise the value to the US conservative media of a flamboyantly gay rabble-rouser.

He duly amped up the cruelty of his shtick, taunting trans people, feminists, Muslims and minorities with gleeful abandon.

Beyond scoring points against the hated liberal establishment, his value lay in providing cover for accusations that the American right is fundamentally homophobic.

But perhaps even more pernicious was the way Yiannopoulos and his enablers used the first amendment of the US constitution, which protects free speech, to justify his hateful effusions. A tour of US universities – an opportunity to push the concept of campus tolerance to the limit – culminated in a riot by protesters at Berkeley this month.

This “no-platforming” incident sparked a debate about academic free speech – the principle of defending people’s right to say things you don’t agree with was frequently touted – but Yiannopoulos and his supporters seemed to be demanding consequence-free speech, not free speech.

With the cancellation of his Cpac appearance, however, US conservatives appear finally to have discovered a limit to their love of free speech.

By “no-platforming” Yiannopoulos the American Conservative Union has revealed its double standards. Its commitment to free speech seems less an absolute principle than a pretext to justify offending people it doesn’t like.

1 Bobby Storey: The IRA's planner and enforcer who stayed in the shadows
2 Is Donald Trump losing his touch?
3 Q&A: How close are we to having a Covid-19 vaccine?
4 Unflappable ‘Dr Tony’ became public face of Covid-19 crisis response
5 Gardaí to start checking if pubs are ‘ignoring’ Covid-19 guidelines
Real news has value SUBSCRIBE