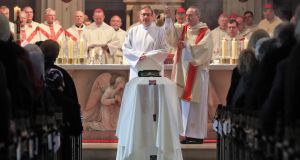 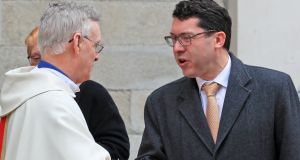 Senator Ronán Mullen at the Pro-Cathedral for the funeral Mass of Cardinal Desmond Connell. Photograph: Collins 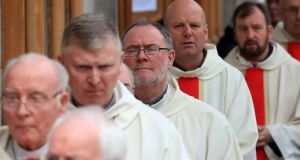 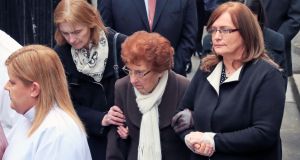 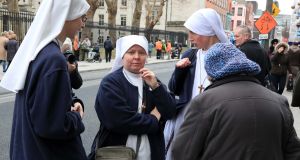 Nuns from the Missionaries of Charity attend the late prelate’s funeral. Photograph: Collins 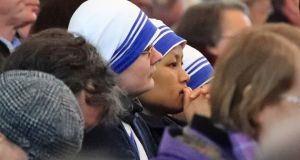 Nuns from the Missionaries of Charity among the mourners. Photograph: Collins 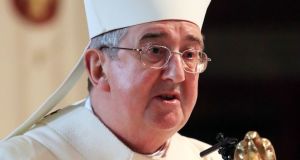 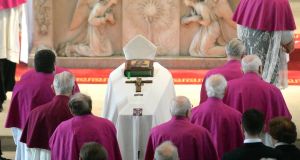 The funeral procession of Cardinal Desmond Connell at the Pro-Cathedral on Friday. Photograph: Cyril Byrne

Archbishop of Dublin Diarmuid Martin reflected on the age profile of those present at the funeral Mass for Cardinal Desmond Connell yesterday , as representing “generations past”.

“Cardinal Connell was born 90 years ago; he became a bishop almost 30 years ago. I am his successor now for 13 years. I am already an old man. We no longer represent the challenges and changes of the world of the younger generations,” he said.

“Most of the bishops of Ireland are here this morning. We have representatives of every dimension of Catholic life in Dublin. Let me say this: most of us represent generations that are past,” he said.

However the message of Jesus Christ “is always the same but always new and must be preached . . . with ever-renewed vigour and sensitivity”, he said.

The Mass at the Pro-Cathedral was celebrated by Archbishop Martin with papal nuncio Archbishop Charles Brown, Catholic Primate of All-Ireland Archbishop Eamon Martin, his predecessor Cardinal Seán Brady, past and present members of the Irish Bishops’ Conference and many priests and religious of the Dublin archdiocese. 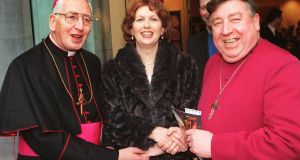 Dr Martin told those gathered that the late cardinal, who died in Dublin last Tuesday, “became archbishop at a difficult time in this diocese. Many comments in these days noted that he was slow to recognise the extent of the problem of child sexual abuse by priests. It is not enough to make that comment now from a distance.

“It must be said that he found himself surrounded by a culture and at times by advisers who were slow and perhaps even unwilling to recognise both the extent of the problem and the enormous hurt that had been done to children, a hurt they still carry with them.

“That hurt has still to be fully recognised; that wound cannot be consigned to past history. For victims it still remains, ” Dr Martin said.

Dr Martin said the cardinal must be remembered as the one who “established the child protection service in this diocese, which was the beginning of a new culture which has now, thank God, been widely accepted and welcomed.”

‘Needs of the poor’

The late cardinal “felt the needs and responded to the needs of the poor, of travellers, of refugees, of the homeless and of victims of addiction and of HIV aids” but “he was not a politician or a vote seeker”.

He may “have been at times insensitive in things he said, but not out of malice. He was criticised for being at times less than diplomatic, just as I am criticised by being overdiplomatic,” said the archbishop.

Readings were by John Connell and Mark Heather, nephews of the late cardinal, while Dr Eileen Kane, a friend and former colleague of his at UCD, led the Prayers of the Faithful. Music was by the Palestrina choir, conducted by Blánaid Murphy and with Prof Gerard Gillen on the organ.

Also present were David Quinn of the Iona Institute, Br Edmund Garvey of the Irish Christian Brothers, and chair of the Catholic Church’s national board for safeguarding children John Morgan.