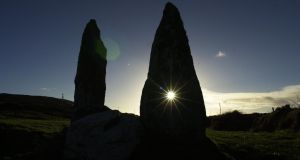 Standing stones are protected under the National Monuments Acts and anyone wishing to carry out work on one must give two months’ written notice to the Minister for Heritage. Photograph: Frank Miller

An investigation has begun into a west Cork farmer who reinstated a fallen Bronze Age standing stone on his land with the help of two druids.

The stone had been knocked over more than a decade ago by a bull who was using it as a scratching post.

The National Monuments Service confirmed it had begun an investigation into the actions of Donal Bohane on land rented from his cousin at Coolnagarrane, Skibbereen.

It said the majority of archaeological monuments in Ireland, including standing stones, are protected under the National Monuments Acts and anyone wishing to carry out work on one must give two months’ written notice to the Minister for Heritage.

Mr Bohane told The Irish Times the stone had been pushed over by a bull in 2009 and had lain on the ground since then.

“Every day you would be passing, you would see the bull scratching himself on the stone – it was a nice itching spot but the problem was there was nothing around the stone. I was always told these stones were as much underground as overground but that was not the case with this one. The ground around it was eroded so the bull didn’t have much to do to knock it.”

He said he recently decided to see if he could re-instate it as he wondered if a spate of bad fortune on his farm was related to it being knocked over.

“When you look back to 2009, things seemed to be very good but we have had every sort of problem, particularly over the last few years when animals got sick. In August, we had this really bad flooding and we lost 18 acres of maize when the field was flooded to a depth of nearly five feet,” he said.

“At times you would laugh it off but I decided to make inquiries so I contacted some folklore experts and they told me it would be okay to re-stand the stone.

“One of them put me in contact with these druids in Kerry so they came down and performed a ceremony when we re-stood the stone.”

Jan Tetteroo and his wife Karen – members of the Grove of Anu, a local branch of the worldwide Order of Bards, Ovates and Druids – travelled from their home in Glenflesk, Co Kerry to perform a druidic ceremony as the stone was re-instated with the help of a bulldozer.

“We did what we call a druidic ceremony where we connect with the elements and the land and the directions,” said Mr Tetteroo.

“We made it clear in our ceremony that we wanted to make sure any ley lines that run along the land were not blocked by the fallen stone and we invited whatever seen and unseen creatures were in the area for their aid to stop the streak of misfortune that Donal had suffered on his farm.”

Mr Tetteroo said it was clear which was the top and which was the bottom of the stone and where it had exactly fallen so it was a simple matter of re-standing it.

Mr Bohane said he was surprised nobody from the National Monuments Service had contacted him previously. The stone had been lying on its side in the field less than 50 metres from the roadway ever since his bull had knocked it over, he said.

“All we did was put it back up and cleaned around it,” he said. “It looked nothing at all lying on the ground but it’s impressive enough now it’s standing up again.”