Taoiseach to meet opposition leaders over Woulfe controversy on Friday 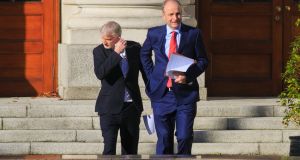 The meeting between Taoiseach Micheál Martin and Opposition leaders on the controversy surrounding Supreme Court judge Séamus Woulfe will take place on Friday, the Government has confirmed.

Mr Martin will give a collective briefing in Government Buildings to the leaders of parties, alliance and Dáil groupings on the issues raised by the impasse involving Mr Woulfe and other members of the Supreme Court.

The Taoiseach is also expected to share legal advice on issues surrounding an impeachment process under Article 35 of the Constitution.

Mr Martin told the Dáil on Tuesday that he did intend to meet opposition leaders to discuss the stand-off between Mr Justice Woulfe on the one hand, and Chief Justice Frank Clarke and other Supreme Court colleagues on the other.

Mr Justice Clarke’s opinion that Mr Justice Woulfe should resign from the Supreme Court, which he made public, and the former Attorney-General’s refusal to do so has created a crisis that may need to be resolved in the Oireachtas.

Attorney General Paul Gallagher advised the Cabinet on Tuesday morning the episode has raised serious Constitutional issues and the Government has said it will need time to take advice, and reflect, on the developing situation.

While publicly TDs and Senators have refrained from making comment, privately there have been markedly negative views about initiating a process.

The Irish Times has spoken to a number of TDs and Senators from the two main government parties, Fianna Fáil and Fine Gael, who have expressed serious doubts whether Mr Justice Woulfe’s attendance at the golf dinner in August, and the nature of his apology, have reached the threshold of “stated misbehaviour” which would be required if he were to be impeached.

Some Senators and TDs - both party-affiliated and non-affiliated - have already said privately they will actively oppose any attempt to begin an impeachment process under Article 35.4 of the Constitution.

In an impeachment process, standing orders of both Houses of the Oireachtas allow the Dáil and the Seanad to establish separate select committees (which may be merged into one committee chaired by a TD) to establish the facts of the matter under consideration. The committee then reports to both Houses and they must separately consider impeachment. All members of both Houses must act independently and cannot be made subject to a party whip in this process.

Several TDs and senators, speaking on the basis of anonymity, told The Irish Times they would resist any effort to begin an Oireachtas process to remove Mr Justice Woulfe from office. The cited reasons such as the matter should have been dealt with by the judiciary, or that impeachment is a disproportionate remedy to deal with this case.