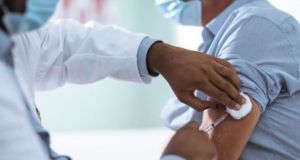 It is unlikely that additional supplies of the flu vaccine will become available because of international demand, the Dáil has been told.

Minister of State Thomas Byrne said the HSE placed its order for the vaccine in February, acquiring 1.35 million doses, 20 per cent more than last year.

Confirming that the final 50,000 doses would be used by the end of November he said the priority is to provide the vaccine to “those who most need it”.

The Minister urged families to contact their GP or pharmacy to have their child inoculated with the vaccine which is administered as a nasal spray.

“The last thing you want is a child coming home with flulike symptoms and maybe the flu, and having to isolate the whole family for a couple of weeks,” he said.

The Health Service Executive (HSE) earlier denied reports that hundreds of thousands of doses of the flu vaccine have gone missing.

Dr Colm Henry, the HSE’s chief clinical officer, said 50,000 doses of the vaccine had been held back to ascertain “where the gaps are” in terms of distribution.

“It’s normal for a lag time between us distributing the vaccine to GPs and pharmacies and records coming back as to who has been administered,” he told RTÉ’s Morning Ireland on Wednesday.

“What we want to find out is where the greatest level of demand is. We’re very clear about those priority groups, as per the WHO recommendations, namely older people, over 65 years, healthcare workers in direct contact with patients and other groups; that’s where we want to focus our remaining stock that we normally hold back.

“So, no vaccines have disappeared. We’ve held back, as we normally do every year, in a year of unprecedented demand, 50,000 so we can ascertain where the gaps are, where the priority groups are most needful of this vaccine and then distribute these remaining 50,000 by the end of November.”

Dr Henry said the HSE was seeing “unprecedented levels of demand” for doses of the flu vaccine from at-risk groups, which is “good”.

He said from the records received from GPs and pharmacies, over 400,000 vaccines had been administered to over 65s, an increase of 100,000 from the same time last year.

Dr Henry later addressed the Oireachtas health committee where he said, of the 700,000 doses distributed this winter, most had gone to priority groups. About 400,000 doses have been administered to over-65s, 35,000 to healthcare workers and 223,000 to adults in at-risk groups.

“There’s no vaccine disappeared or gone,” he said. “We want to find out where we can direct the remaining 50,000 to those who need them.”

“We have full records of the 1.3 million doses which have been distributed to date,” it said.

“Applications for reimbursement through PCRS (Primary Care Reimbursement Service) have been made in relation to 700,000 doses which indicates that some of the vaccine that has been distributed has yet to be either administered and/or an application for reimbursement submitted. Therefore we intend to obtain more information prior to distributing the remaining doses of vaccine.”

It said demand for vaccination this year is “unprecedented” and in keeping with WHO recommendations “we are asking that the remaining flu vaccine injections are concentrated on those over 65 and front line heath care workers”.

“The most recent report indicates that there is no evidence of influenza viruses circulating in the community in Ireland,” the HSE added.

“If uptake among those in the at-risk groups and children aged 2 – 12 reflects the demand seen to date, twice as many people may be vaccinated this year as in the 2019/20 vaccination season.”