Not reopening pubs in December will create a ‘two-tier Christmas’, vintners say

One third of pubs in Dublin, about 250, have not opened a single day since March this year 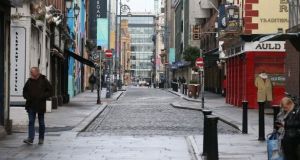 Temple Bar in Dublin, an area of the city centre that is usually packed with visitors and pubs open. Photograph: Stephen Collins/Collins Photos

Failure to reopen pubs and allow indoor service for the December period, will create a “two-tier Christmas” for those working in the hospitality sector, vintners lobby groups have said.

Under current Level 5 coronavirus restrictions, pubs, bars and cafes can only offer takeaway services, and before the national lockdown pubs in Dublin were limited to outdoor dining for a maximum of 15 people only. The Government is to consider easing the current lockdown restrictions at the start of December.

Publicans’ representative groups have called for the hospitality sector to be allowed to reopen in the run-up to Christmas, a traditionally busy period for the industry.

The vintners lobby has said if pubs are forced to remain shut, or limited to outdoor service only, it will create a “two-tier Christmas,” between those allowed return to work, and those in the hospitality sector.

A third of pubs in Dublin – about 250 establishments – have not opened for a single day since March this year, the groups said in a joint statement. And nearly half of the pubs across the country were only able to trade for two weeks of the same period, the statement said.

Donall O’Keeffe, chief executive of the Licensed Vintners Association (LVA), who represent Dublin pubs, said it was “not ok for Government policy to be creating a ‘haves and have nots’ division all over the country around Christmas.”

“Are Micheál Martin or Leo Varadkar going to tell the tens of thousands of children whose families work in the hospitality sector that Santa may not come to them this year or that he’ll be operating on a severe budget, while their neighbours and friends face no such restrictions?,” he said.

“People in our industry have taken a lot of pain this year, but if this situation is allowed to happen I don’t think it will ever be forgotten. It is a sure-fire way to sow lasting discord around the country,” Mr O’Keeffe said.

The vintners groups said pub staff were reporting that they would not be able to afford Christmas for their families while on the Pandemic Unemployment Payment.

Padraig Cribben, chief executive of the Vintners Federation of Ireland (VFI), who lobby for pubs outside of Dublin, said “limiting hospitality businesses to a 15 person outdoor capacity simply won’t do in December”.

The sector had to be allowed to resume with indoor trading, or the “Government might as well just take the keys away for most of these businesses,” he said. Limits to outdoor service only “certainly won’t allow 90 per cent of the sector to go back to work,” he said.

However, public health officials have previously outlined significant clusters of cases arising from people congregating in pubs and restaurants.

“Publicans and their staff have already proved they can successfully and safely open under government guidelines,” Mr Cribben said.

“This was shown when the food pubs reopened in June and when the traditional pubs outside Dublin reopened towards the end of September. There were no increases in the infection rate attributed to pubs,” he said.

Meanwhile, infectious diseases expert Prof Paddy Mallon has warned that the Irish public need to “sit back and think about what they want from Christmas” as they are not going to have “a normal Christmas”.

Speaking on Newstalk’s Pat Kenny show, Prof Mallon said that if people started to “go out” and have close contacts that would lead to a repeat of the situation the country was in at the end of October.

People should plan what they want from Christmas and then fit those plans around public health regulations, he suggested. Where people have contacts they should make them as safe as possible.

An examination of data from October showed that Covid-19 outbreaks were happening within the home. “The one thing that we could do as a society is not to return to unregulated home gatherings. That’s where a lot of cases were coming from.”

There was a need “to dig down into cases as they develop” to see if they were arising outside the home. The hospitality industry had been very responsible in their approach and it would be necessary “to see what works and what doesn’t work,” Prof Mallon said.

“We need evidence to have a more nuanced approach.”

Earlier on Newstalk Breakfast, immunologist Dr Tomás Ryan also warned that the country could find itself back at 1,000 cases a day by January if restrictions were lifted as planned on December 1st.

The Government needed to warn people that, under the current restrictions this Christmas was “not going to be anything like the Christmases we normally have anyway.”

It was not going to be worth it to end up in another lockdown in January or early February. Such a scenario should be prevented in any way it could, he said.

“Even if we get down to 100 cases a day on December 1st, it seems to me it would be much more profitable and pleasant for everyone in Ireland if we got cases down to single figures or to zero and then kept them there so that we could open up and stay open for as long as possible.”

Ireland could be in the same situation as Australia, which he described as “wonderful”, if the current lockdown was maintained for longer.

“I think we can return to a normality that is quite like life right now in most of Australia by early January, which would mean Level 1 or Level zero restrictions by January, if we get rid of this now.

“One way of doing this would be to delay Christmas until the end of January and have a real Christmas and a real party then.”

Extending Level 5 for at least a few weeks would be in everyone’s best interests, he said. The Government had not communicated “reasonable expectations” of what Christmas was going to be like.

“It is certainly not going to be anything like the Christmases we normally have anyway. The important thing is, we are all in lockdown now, we are paying a heavy price anyway and we want to make sure we get the right benefit from it and we won’t be getting that if we have another lockdown in January.”