Pricewatch: ‘I am out of pocket for the mistakes of others’ 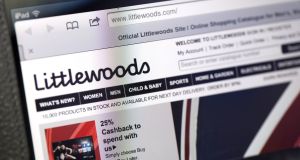 Last May reader returned a bed and mattress she purchased from Littlewoods Ireland but had a long wait for a a refund. Photograph: Simon Dawson/Bloomberg

“It pains me to have to do this but I am at the end of my tether and short of going to the small claims court. There is not much else I can do but I think this issue might be worth highlighting to your readers.”

So begins the mail from a reader called Rhona.

“Last March I ordered a bed and mattress from Littlewoods Ireland for my son. The items arrived at the start of April but after assembling the bed and using it for a week or so, I realised the mattress really wasn’t fit for purpose,” she says.

“The bed was fine but the mattress was like a trampoline it was so bouncy. My son is four and kept falling out of the bed when he rolled over. So I contacted Littlewoods and they said I was still within the time frame to return it but because the mattress and bed were sold as part of a package, I would have to return both. I was fine with this.”

The first issue for Rhona was getting the bed and mattress returned. “Because it was a large item, Littlewoods said they would send someone to collect it. Fine. I ordered a new one from another store. But still the Littlewoods one remained in our house. It took a lot of phone calls and a long time for me to figure out why no one was coming to collect it.”

Eventually, she says, Littlewoods Ireland “insisted it was a two-man job and because of Covid they couldn’t organise this. Why they couldn’t have told me this on my first call, I don’t know. Anyhow, I was afraid the kids would damage it so I was eager for it to be returned. Because it is really only a toddler bed, it definitely could have been lifted by one person.

“After a few weeks a courier eventually called to collect it. Happy days. This was last May and I am still waiting for our money to be refunded. I have called a million times and Littlewoods keep on telling me they’ll get back to me but they don’t. Basically, it seems that I should have gotten a receipt from the courier to say they collected the items and I didn’t. I am assuming that they lost the bed and mattress in their storeroom or depot and because Littlewoods didn’t receive the item back, I don’t get my refund.”

Rhona then apologises for the “big long spiel, but the nub of it is that I am out of pocket for what I believe are others’ mistakes and poor practices. At no point in my many, many calls with Littlewoods did they say I should get a receipt from the couriers. To be honest, I probably thought they were Littlewoods delivery operators, rather than completely separate couriers. I have given up trying to get anything out of Littlewoods by way of information and it seems to be a case of their word against mine. I am not a vulnerable, clueless customer – I work in law and am well aware of the workings of CPC [consumer protection code] and Consumer Credit Act but, despite this, I still can’t get anywhere with them.”

We made contact with Littlewoods Ireland and a spokeswoman apologised for “the service failings this customer experienced, including the issues surrounding the refund for the item and collection, which was also impacted by restrictions earlier this year”. She said the company had contacted the customer directly to say sorry and issued a refund for the item that was collected. “We have also sent a gesture of goodwill to reflect the inconvenience caused. We always strive to give our customers the best service, but the service this customer experienced does not meet the high standards we set ourselves. We are now reviewing this issue to help to ensure that the same mistakes aren’t repeated.”