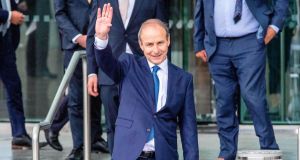 Micheál Martin’s election as Taoiseach has been marked by congratulations, as well as policy prescriptions from a range of interest groups. Photograph: Paul Faith/AFP via Getty Images

Micheál Martin’s election as Taoiseach has been marked by congratulations, as well as policy prescriptions from a range of interest groups.

The Irish Farmer’s Association (IFA), one of the most significant lobby groups in the country, said in a statement that Mr Martin should concentrate on the budget for the Common Agricultural Policy and Brexit.

Tim Cullinan, president of the IFA, wished the Cork South-Central TD well in the role of Taoiseach and said he was looking forward to “working with him on policies to improve farm incomes and develop agriculture”.

“We will be seeking an early meeting with the Taoiseach and the Minister for Agriculture to put forward IFA’s policy priorities. The two biggest threats to farming are the next CAP budget and the negotiation of the Brexit talks,” he said, calling for strong leadership in the wake of the political uncertainty that has persisted since February’s general election, and the impact of Covid-19.

The IFA is seeking an increased CAP budget and the maximum permissible level of national co-financing to the European spending pot. “The programme for government contains no specifics on the CAP Budget or the Government contribution to Pillar II funding. We will be looking for clear commitment on this,” he said.

The farming group said it is part of the solution to climate change, and will be putting forward a range of proposals for the Climate Action Bill, which the government has committed to introducing in its first 100 days in office.

Environmental lobby group Friends of the Earth welcomed the programme for government as “the strongest we have ever seen on climate action,” but warned “it only gets Ireland to the starting line in the race to contain climate breakdown.”

Calling for new, stronger climate laws, Friends of the Earth director Oisin Coghlan said: “Even cutting our emissions in half in 10 years does not amount to Ireland doing its fair share to contain climate breakdown. This programme for government is only a downpayment. There is more to do.”

“The climate justice movement in Ireland is stronger and more diverse than it has ever been,” he said.

On Friday evening, employers body IBEC called for a massive spending plan to be signed off in July, amounting to €15 billion on-top of already committed funding. Fergal O’Brien, director of policy with the group, said the programme for government is “sensible”, but warned that Ireland is a “long way behind most other countries in terms of addressing liquidity problems for business”.

“We need to save as many businesses and jobs as possible and it’s urgent that happens over the month of July,” he said.

Patricia King, general secretary of the Irish Congress of Trade Unions, said the unions would work with the incoming government, and emphasised its No Going Back policy, “which sets out a new deal for workers and society and is a detailed plan on the way forward for the country amid the unprecedented economic global crisis caused by the Covid-19 pandemic.”

Dr Paul Colton, the Church of Ireland Bishop of Cork, Cloyne and Ross, congratulated Mr Martin. “In a particular way we in Cork enjoy the achievements of our own,” he said. “I also extend my good wishes to his family and friends who, I know, are delighted and share in the joy of his personal achievement.”

It warned, however, that the new government must “embrace the challenges created by Covid-19 and move rapidly to ensure that lessons are learned from the pandemic, particularly in relation to the care and support of older people.”

It welcomed the commitment in the programme for government to establish a commission on care, but said it is “deeply disappointed that (it) reflects a determination to maintain the current two tier system” in older person’s care, split between home care and nursing homes.

“In our experience many people have ended up in nursing homes against their will because of a lack of community based alternatives and Covid-19 has tragically highlighted the weakness in the current two tier system,” said Mervyn Taylor, the group’s executive director.