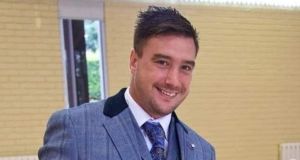 Police investigating the murder of a man at a house in Ballymena, Co Antrim on Saturday morning have named the victim as Jason Lee Martin.

Police investigating the murder of a man at a house in Ballymena, Co Antrim on Saturday morning have named the victim as Jason Lee Martin.

Detectives from the Police Service of Northern Ireland’s major investigation team are currently investigating the murder of the 31-year-old at a house in the Orkney Drive area of Ballymena early on Saturday morning.

PSNI detective inspector Kerry Brennan confirmed that Mr Martin had been stabbed in the house on Saturday morning and said an 18-year-old man had been arrested on suspicion of murder. The suspect remained in custody on Saturday evening.

The PSNI has appealed for anyone with information or who could assist with the investigation to get in touch by calling 101. Information can also be provided to the independent charity Crimestoppers on 0800 555 111 “which is 100 per cent anonymous and gives people the power to speak up and stop crime”, said the PSNI officer.