Learner permits extended as driving tests to resume next week 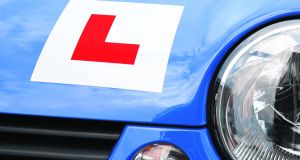 Driving lessons are also permitted from Monday under the Government reopening road map.

Outgoing Minister for Transport Shane Ross has assured learner drivers they will soon learn the date for their test, as the Department of Transport confirmed the service will gradually re-open from Monday.

In the meantime, the validity of learner permits which were due to expire between July 1 st and October 31st has been extended by four months

When the testing system does reopen, candidates will face a series of new protocols to combat the spread of coronavirus, Mr Ross said.

The testing system is among the services to resume as the country enters phase three of the unwinding of Covid-19 related restrictions on business and social activities.

However, it has not yet been decided precisely when driving tests, which are administered by the Road Safety Authority (RSA) will resume.

In a statement this morning, Mr Ross said the development “will be welcome news for the many learner drivers who have been waiting to sit a car test since the service was suspended on 13 March.

“While a specific date has not yet been finalised for the restart of car tests, this is a high priority for my officials and the RSA who have assured me that they are working towards getting car tests up and running, as soon as possible in Phase 3.”

He said that things will be different, however, when the driving test resumes, with measures put in place to protect staff and customers. “This will mean that for all categories being tested, at least for the initial resumption period, everyone will have to get used to the new protocols to prevent the spread of Covid-19.”

The details of measures to be observed at all test centres will be supplied to driving test candidates beforehand, he said. Driving lessons are also permitted from Monday under the Government reopening road map.

The outgoing Minister emphasised that approved driving instructors are independent contractors, but have “personal responsibility to follow Government and Health Authorities’ Protocols.”

The extension will apply to permits which were due to expire after March 1st and already benefitted from an extension introduced in April, Mr Ross said.