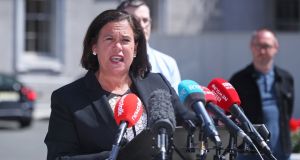 Opposition parties have warned that the new Government has failed to recognise the “enormity” of the “economic tidal wave” that is currently hitting Ireland.

Labour Party leader Alan Kelly said he believed the lack of financial detail in the approved Programme for Government was “comical.”

“The Programme for Government promises much, but without timelines and costings, many of the proposals will in reality be kicked further and further down the road,” he said.

Aontú party leader Peadar Tóibín said the proposed deal is “oblivious to the economic tidal wave that is currently” hitting the country.

“This state will have a budget deficit of €30 billion this year. That fact has been absent from every speech given in this chamber today. Not only does the Programme for Government, the founding document of this administration not deal with this fact, it hardly recognises the enormity of this threat.

“When we in Aontú sat down with Fianna Fáil and Fine Gael to test whether or not real change was to be found in this proposed government, it became blindingly clear that only vague generalities would be discussed. Signing up to this programme for government was for us akin to signing a blank check.”

Fianna Fáil TD Éamon Ó Cuív, who spoke out against the deal, said that he was happy to see Micheál Martin elected as Taoiseach and that the party must work to bring its membership together.

“I stood for what I believed and that is respected in the party. The one thing we have to take out if the election is there are a lot of different views among the membership and we need to bring them all together and be inclusive.”

He said the greatest challenges for the new Government will be unforeseen developments.

“The greatest certainty in Government is uncertainty. If you look at the last three or four years, no one foresaw CervicalCheck or the pandemic. The big challenge will be the unforeseen. And there is only a core majority of four up and four down. As the last Government found a majority of four or five can evaporate very quickly.”

“Obviously others have kept us out of Government. Change is coming, and try as they might, they cannot stop change. Stick with us, because we are going to finish this journey,” she said.

The party’s deputy leader in the Dáil Pearse Doherty said that Fianna Fáil and Fine Gael are using the Green Party as a “fig leaf” in order to exclude Sinn Féin from Government.

Opposition parties are also calling on “left-wing activists” in the Green Party to leave the party.

“People voted for change in the general election, they voted for a fresh start and for a new beginning. They voted for a move away from the two parties that have shared power in this State for nearly one hundred years,” Mr Doherty said last night.

“Faced with the prospect of a Government of change, the two old parties have come together to circle the wagons to exclude Sinn Féin, and they are using the Green Party as a fig leaf to do this.

“The reality is that the desire for change is even stronger now than it was in February. People know what it’s like to have Fianna Fáil and Fine Gael in power together.”

Mr Doherty said that Sinn Féin will be “determined” in leading the opposition.

“Fianna Fáil and Fine Gael will be faced with the most determined opposition they have ever seen because Sinn Féin will stand up for ordinary workers and families.”

RISE and Socialist TD Paul Murphy urged activists in the Green Party to leave and join a new party.