Concern at increased level of public disorder among young people 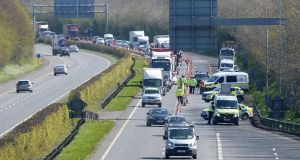 As Garda members were working on the Covid-19 policing operation, including establishing checkpoints to monitor the movement of people, there were 2,127 detections of crimes. This checkpoint was put in place on the M4 near Celbridge, Co Kildare in April. File photograph: Alan Betson/The Irish Times

Concern was mounting across Ireland about the increased level of public disorder and anti-social activity involving young people who found themselves with little to do due to the impact of Covid-19, the Policing Authority has said.

Those concerns reported by the authority are supported by the latest crime data published by Garda Headquarters, Phoenix Park, Dublin, showing public order crime is the only offence-type that has now rebounded to pre-pandemic levels.

The Policing Authority has consistently praised the force’s performance during the pandemic period but has now added that some members of the public believed they would only get a professional service from the Garda if they “got lucky”.

“The overriding sense expressed is that there is a perceived dependence on getting ‘lucky’ in getting the right individual (garda) rather than being able to trust that the organisation’s culture, strategies and policies will deliver a consistent policing response,” the authority said in its latest weekly report on the performance of the Garda during the pandemic.

Chairpersons of joint policing committees nationwide were expressing “growing concerns about rising levels of public disorder and incidents of anti-social behaviour connected to young people” at a time when other crime types were falling.

“There was a sense expressed that as young people increasingly begin to find spaces to meet, that the potential for conflict with the Garda Síochána will increase,” the authority said, adding young people felt more oppressed by policing during the pandemic than other groups.

“The view was expressed that young people were disproportionately policed during this (Covid-19) period.” In some cases young people had been told by gardaí they were not allowing into parks yet families were permitted.

Overall, the authority believed the Garda had used its new powers under Covid-19 with restraint. It had only arrested people or taken other actions against people 313 times. This included people who were further than 2km or 5km from home without a “reasonable excuse” during the strict lock-down period and who refused to go home when told to by gardaí.

Of the 313 enforcement actions by the Garda, some 38 had been recorded in the Cavan-Monaghan division, which was more than any other Garda division. The Galway division was next, with 35 cases, and the Dublin Metropolitan Region East division had 22 enforcement incidents, with the Mayo division next on 15 cases.

While spit hoods had been used 80 times, and rates had been very low since early May, the authority was very concerned at poor record keeping by Garda members when documenting their use of spit hoods on suspects to prevent them spitting at gardaí.

In 50 per cent of cases gardaí did not state If the suspect had learning difficulties and in just over half of cases there was no indication if medical assistance had been required for the person on whom a spit hood was used. The authority was very concerned about this poor record keeping.

As Garda members were working on the Covid-19 policing operation, including establishing checkpoints to monitor the movement of people, there were 2,127 detections of crimes. These were breaches of regular criminal law not connected to Covid-19.

Of those 2,127 crime detections, 38 per cent were motoring crimes, 19 per cent were public order crimes and 15 per cent related to drug possession.