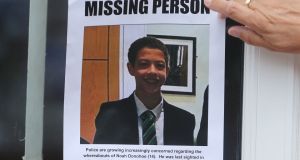 A poster of Noah Donohoe in a window near where he was last seen alive in north Belfast last weekend. Photograph: Niall Carson/PA Wire

Police have said a body found in a storm drain in Belfast on Saturday morning is believed to be that of missing teenager Noah Donohoe (14).

The Police Service of Northern Ireland (PSNI) said the body was recovered in north Belfast just before 9.45am.

The PSNI said officers believe it is the body of the 14-year-old and they are continuing to provide support to his family. They said there is no suggestion of foul play and asked that people “refrain from speculation as this is not helpful”.

Noah Donohue, from south Belfast, went missing after cycling across the city on Sunday. He was last seen in the Northwood Road area just after 6pm.

He had cycled approximately 4km across the city from his home in south Belfast to north Belfast, where police believe he may have fallen off his bicycle and hit his head. He was seen discarding his clothes and cycling naked, actions which police and his family said were “completely out of character.”

The police’s main line of inquiry was that he may have suffered some form of trauma which had left him either disorientated or incapacitated.

At a media briefing on Saturday afternoon, PSNI Superintendent Muir Clark said a postmortem is to take place and the investigation into the circumstances of his disappearance is continuing.

“But there is no evidence to suggest foul play,” he said at a press conference at PSNI Musgrave Station in central Belfast.

“From the initial inquiries we do not see foul play at this stage,” added Supt Clark.

He explained that Noah’s body was found in a storm drain complex in north Belfast that was almost a kilometre long.

It had been searched for a number of days but finding the body took so long because it was an “extremely challenging environment”. He said specialist search and rescue officers were involved. “They were working in the pitch black.”

Supt Clark said police were continuing to examine the electronic equipment that was recovered. He hoped this might answer some of the questions about why Noah had cycled from the south of the city to the north.

He said it was possible that the reported head injury that Noah suffered played a part in his death. He hoped the post mortem would provide some answers in this regard.

“In my 30 years in the police this is one of the most unusual missing person inquiries that I have done,” he told reporters.

Supt Clark also criticised rumours about the teenager’s disappearance that were circulating on social media and, he said, were “completely without foundation”.

“This type of commentary and rumour is distressing for Noah’s family and is extremely unhelpful.

“If people post distasteful and patently untrue rumours on social media we will investigate that,” he added.

According to the PSNI, the teenager left his home in South Belfast at about 5.30pm on Sunday. He was riding a black Apollo mountain bike and wearing a black skateboarding helmet, khaki green North Face jacket, grey sweat shorts with an emblem on one leg, a tie-die blue hoody, Nike trainers with a bright yellow tick and carrying a khaki rucksack containing a book and a laptop.

He was seen on Ormeau Avenue at 5.45pm and on Royal Avenue heading towards York Street a short time after, then on North Queen Street heading towards the Limestone Road at 5.57pm.

He was last seen cycling naked on Northwood Road in north Belfast, where police believe he dropped his bicycle and left the area on foot. There have been no further confirmed sightings since 6.11pm on Sunday.

The North’s first minister, Arlene Foster, expressed her sadness at the discovery.

“My heart goes out to Noah’s family. Absolutely devastating,” she wrote on social media. “The community acted as one in the search and I know they will also support Noah’s family at this time of heart-rending grief.”

She thanked the police, community rescue teams and the local community for their “tireless efforts” during the search.

The deputy first minister, Michelle O’Neill, said it was “heartbreaking”.

“The whole community has been left numb after six days of searches,” she posted on Twitter. “Sincere sympathy and condolences to his mother Fiona, family and friends at this awful time.”

The MP for North Belfast, Sinn Féin’s John Finucane, said his thoughts and condolences and those of the entire community in north Belfast were with the teenager’s family and friends, and appealed for anyone with information which could help the police investigation to come forward.

“This is tragic and heart breaking news for his family and friends and all who knew him, as well as the entire community who were involved in the search for him over recent days,” he said.