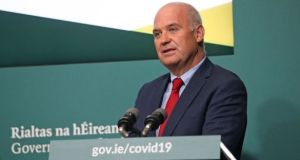 The State’s most senior medical official has warned the reintroduction of overseas travel is a “major threat to public health and increases the risk of a potential second-wave” of Covid-19 in Ireland.

The warning is contained in a letter sent by Dr Tony Holohan, the chief medical officer, to Minister for Health Simon Harris following Thursday’s meeting of the National Public Health Emergency Team (NPHET).

It echoes comments made by Dr Holohan during a press conference on Friday night, when he said he is “beyond nervous” about the reintroduction of overseas travel, and encouraged people to holiday at home this summer.

In a tweet sent on Saturday morning, the CMO said “what worries me most now is travel from overseas and I fear many planning foreign trips. 2020 is a year for a staycation”.

The letter outlines how 7 per cent of cases notified over the past fortnight have been associated with travel, while around the world, data shows the spread of the disease remains strong.

There is thought to be significant disquiet among some members of NPHET regarding the relaxation of travel restrictions, currently planned for July 9th. On that date, it is currently envisaged that a “green list” of countries be introduced that people can travel between without having to undergo a 14-day quarantine period.

On this, the letter notes the planned reintroduction of travel corridors. “In order to ensure the credibility of these arrangements, it will be necessary to put in place legal restrictions regarding travel from countries which do not qualify for such arrangements, as is the approach taken by other EU member states”.

“In this regard, the NPHET recalls with urgency its prior recommendations on the need for legal restrictions to be put in place in regard to overseas travel.”