‘I felt like I was in a war’, says mother of Irish teen caught up in Florida school shooting 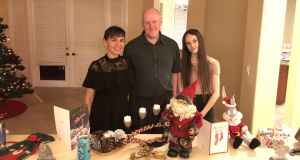 When Olga Hurley and her family moved to Florida last September, they wanted to find somewhere to live that was “safe and beautiful that reminds us of Ireland”.

Olga, who is originally Russian and her husband Joe, who was born in the United States, left Clontarf in Co Dublin to settle in Coral Spring with their son Nikolai (20) and daughter Adelina (16).

In January, Adelina, who had been a student at the Holy Faith School in Clontarf, enrolled in the Marjory Stoneman Douglas High School.

The school is situated in a desirable part of Coral Spring which is south of Miami and on the coast.

“My estate agent said where we are living is so safe that we will never leave,” Olga said.

“It looks like Europe to me. It is rural and quiet like it is in Ireland. The school is 200 metres from our back yard, five minutes walk.”

On Wednesday, Olga was driving home. She knew something was wrong when she saw dozens of police cars pulling up outside the school.

“Normally, I don’t drive, but I was driving outside the doors of the school. I had to go over two medians that divide the traffic. It was crazy,” she said.

“I decided to call my daughter, but she didn’t answer at the start. I knew something terrible was happening. I was panicking. Thank God we have mobile phones here. I texted her and then she answered. I felt like I was in a war. When I saw my daughter, she ran to me.”

The school has 3,000 pupils and is one of the biggest in Florida.

The accused assailant Nikolas Cruz, who was an ex-pupil, killed 17 pupils and teachers with a semi-automatic AR-15 rifle.

He shot them in the hallways and inside five classrooms on the first and second floors of the freshman building. He eventually discarded the rifle, a vest and ammunition in a stairwell, blended in with fleeing students and got away.

Fortunately, Adelina was not near the shooting at the time, her mother says.

“Adelina had classes in a far away building. That group of children who were far away were able to run away,” she explained.

“This is the first time my daughter has faced such a tragic event. I think she will honestly only be able to talk about it years into the future.”

Despite her family’s experience, she said they intend to remain in Florida. “I knew the dangers when we made the decision, but I do not regret the decision to move to the United States.

“I’m adamant I’m staying here. I believe that our life will be good here.”

1 How one couple’s weekend away resulted in 30 Covid-19 cases
2 Taoiseach tells TD to ‘cop on’ over criticism of contact tracers asking about pubs
3 Coronavirus: 429 new cases as vigilance urged amid rises across the country
4 Miriam Lord: Government’s latest comedy of errors offers little to laugh about
5 North: 424 new cases of coronavirus in highest rate since start of pandemic
Real news has value SUBSCRIBE