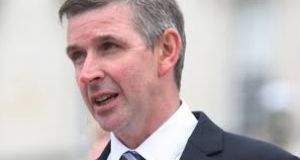 Ian Marshall said he was not affiliated with any political party and would be an Independent if got a Seanad seat.

A former president of the Ulster Farmers’ Union and strong anti-Brexit campaigner may run for a seat in the Seanad, following an approach from Taoiseach Leo Varadkar, it has emerged.

Ian Marshall, a farmer and former president of the Ulster Farmers’ Union, currently works in Queen’s University Belfast in the Institute for Global Food Security.

He has been a dairy farmer for the past 30 years. Mr Varadkar approached Mr Marshall about taking the seat left vacant following Mr Ó Clochartaigh’s resignation, it is believed.

However, the Taoiseach does not have the numbers of his own to guarantee Mr Marshall’s election and would be dependent upon support from Fianna Fáil and others.

Speaking to The Irish Times, Mr Marshall said he was “privileged and honoured” to have been considered by the Taoiseach.

“[I] am honoured to have even been considered. It’s obviously subject to support from TDs and Senators but I will be more than happy to try and contribute to the function of the Seanad,” he said.

“It’s hugely important as agriculture and food is the backbone of the Irish economy. With Brexit looming, it has led to uncertainty in the industry, so careful management and co-ordination are needed to prepare for it,” he added.

“I am a strong Remainer and I believe the UK and Ireland are best served by remaining in the EU. I don’t think people realised exactly what Brexit would entail, so I hope the UK gets a chance to go back to the electorate and to the ballot box based on what they know now.”

Mr Marshall said he was not affiliated with any political party and would be an Independent if got a Seanad seat.

“I was born into a unionist, Protestant family but I am not affiliated with any political party. I have been involved in agri-politics for the last 25 years but it has been non-partisan.”

“I feel frustrated sometimes by the type of politics we have in Northern Ireland where it is divided between green and orange,” he said.

“I’d like to think I would bring a fairly objective opinion about what I think needs to happen for the agrifood industry and the country and economy. You look at Dublin and see how forward-thinking and cosmopolitan it is and I want that to be extended to the rest of the island.”

A spokesman for the Taoiseach confirmed Mr Marshall was considering standing as an Independent.

“Given his background as an Ulster farmer at this time of Brexit, if he receives a nomination then Fine Gael would be interested in supporting him as an independent voice in the Seanad,” the spokesman added.

Election 2020: Voters must register by close of business on Wednesday 10:47
Man (23) doused in petrol and set on fire in Cork attack 10:38
Election 2020: Fine Gael and Fianna Fáil set to reveal spending plans worth billions 09:37
Man (30) attacked with hammer and baseball bat in Cork city 06:41
Over 200 gardaí begin cybercrime training to speed up online child abuse investigations 02:45
SUBSCRIBER ONLY